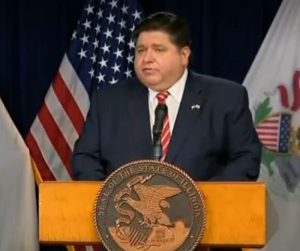 Gov. J.B. Pritzker speaks at his daily COVID-19 briefing in Chicago Thursday, Nov. 19 calling on House Speaker Michael Madigan to either take questions from members of the media or resign. (Blueroomstream.com)

SPRINGFIELD – Gov. J.B. Pritzker on Thursday, Nov. 19 put his own pressure on House Speaker Michael Madigan, saying the Democratic leader needs to answer questions from the press and the public or else resign.

The governor’s comments during his daily COVID-19 briefing in Chicago came one day after federal prosecutors in Chicago handed down indictments against four former Commonwealth Edison officials, charging them with bribery and conspiracy in a scheme to win Madigan’s favor for legislation benefitting the company.

“If Speaker Madigan wants to continue in a position of enormous public trust with such a serious ethical cloud hanging over his head, then he has to, at the very least, be willing to stand in front of the press and the people and answer every last question to their satisfaction,” Pritzker said. “Written statements and dodged investigatory hearings are not going to cut it. If the speaker cannot commit to that level of transparency, then the time has come for him to resign as speaker.”

Madigan himself has not been charged, and he issued a lengthy statement Thursday reiterating his longstanding denial of any wrongdoing.

Madigan has served as House speaker for all but two years since 1983 and is currently the longest-serving state legislative speaker in U.S. history. He is also expected to seek another term as speaker when the General Assembly reconvenes in January, but his support within the ranks of House Democrats has been eroding since he was first implicated in the bribery scheme in July, when company officials entered a deferred prosecution agreement that included paying a $200 million fine.

As of Thursday afternoon, Nov. 19 according to several media reports, he appeared to be short of the 60 votes needed to secure another term as speaker. At the same time, though, no other Democrat appeared to be close to a winning margin either. Rep. Stephanie Kifowit, D-Oswego, is the only other announced candidate for the job, but she has attracted little vocal support from other Democrats so far.

Pritzker would not offer any comment about who he thinks should be the next speaker and he said he had not spoken to Democratic lawmakers since the indictments were released on Wednesday (Nov. 18) night.

“I’ve maintained from the beginning that legislators have a right to make their own decisions about who leads them, and I continue to feel that way,” he said. “These legislators alone hold the unique power to elect the Illinois speaker, and I trust that they will think long and hard about the duties that they owe to the people that we all work for.”

Prior to Nov. 19, Pritzker had tried to keep some distance from the controversy, at first saying only that Madigan should resign if the allegations are proved true.

He stepped up his criticism slightly following the Nov. 3 general election, during which Pritzker’s signature graduated tax amendment went down in defeat, suggesting Madigan should step down from his role as chairman of the Democratic Party of Illinois because the cloud of scandal surrounding him had become a liability for the party.

Madigan on hot seat as others indicted in ComEd bribery scheme