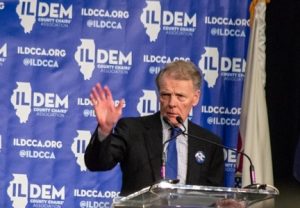 House Speaker Michael Madigan speaks at the Illinois Democratic County Chairs Association brunch in Springfield in August 2019. Madigan, who also chairs the state Democratic Party, is facing an increasing number of detractors from the ranks of House Democrats as he looks for another term as Speaker of the Illinois House. (Capitol News Illinois photo by Jerry Nowicki)

Rep. Will Guzzardi, D-Chicago, became the latest Democrat to defect on Thursday when he announced on Twitter that he would not support Madigan for another term.

“Last night’s news only confirms what we already knew: the old ways of doing business in Springfield won’t be adequate to rise to our present challenges,” he said. “So, let me say publicly: I will not be voting for Rep. Madigan as Speaker in the 102nd (General Assembly).”

Democratic Reps. Jonathan Carroll, of Northbrook, and Sam Yingling, of Grayslake, also issued a statement on Nov. 19 saying they would not support Madigan for another term.

The three new defectors make 15 Democrats who have said publicly they would not vote for Madigan, who has been speaker for all but two years since 1983. If all stick to their positions, that would put Madigan at 58 votes for speaker, two shy of the needed 60 to retain the position when lawmakers vote on the matter in January.

The indictments charged each with bribery and conspiracy in a yearslong scheme to award no-work jobs, internships and contracts to Madigan associates in order to win his favor for legislation benefitting the company.

Madigan himself has not been charged, and on the morning of Nov. 19 he issued another statement steadfastly denying that he engaged in any wrongdoing.

“To the extent that anyone at ComEd or (its parent company) Exelon believed they could influence my conduct as a legislator by hiring someone I may have recommended, who worked for me, or who did political work for me, they were fundamentally mistaken,” he said. “If they even harbored the thought that they could bribe or influence me, they would have failed miserably. I take offense at any notion otherwise.”

The latest charges spell out in greater detail the scheme that was first disclosed in a deferred prosecution agreement that ComEd officials entered in July. Specifically, the new charges cite internal company emails in which the defendants refer to Madigan as “our Friend” or “a Friend of ours.” 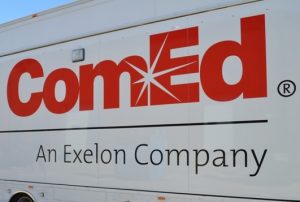 reserved for individuals from Chicago’s 13th Ward, where Madigan serves as Democratic Committeeman.

The indictment alleges that in February 2015, McClain sent an email to Fidel Marquez, a former ComEd executive who has pleaded guilty to his own role in the bribery scheme, in which McClain wrote, “Our Friend’s ward? Summer interns? 10 jobs or 12 or what is the ceiling? Best, Mike.”

The indictment also alleges that in 2016, the year the General Assembly passed the Future Energy Jobs Act, McClain, Pramaggiore and Hooker conspired to hire an outside lawyer with close ties to Madigan to help negotiate the legislation.

In January of that year, according to the indictment, McClain wrote an email to the others regarding the hiring of an outside law firm to work on that legislation.

“I am sure you know how valuable [Lawyer A] is to our Friend,” the indictment quotes McClain as saying. “I know the drill and so do you. If you do not get involve [sic] and resolve this issue of 850 hours for his law firm per year then he will go to our Friend. Our Friend will call me and then I will call you. Is this a drill we must go through? For me, Hook and I am sure you I just do not understand why we have to spend valuable minutes on items like this when we know it will provoke a reaction from our Friend.”

The indictment also describes a phone call McClain made to Madigan in May 2018 in which McClain relayed that Pramaggiore was “experiencing push-back” against an effort to name someone with close ties to Madigan, believed to be Juan Ochoa, former CEO of the Metropolitan Pier and Exposition Authority, to the ComEd board of directors.

In late August, after the deferred prosecution agreement was released, Republicans in the Illinois House petitioned to form a Special Investigative Committee to determine whether there was evidence to commence disciplinary proceedings against Madigan.

That committee has met only twice, most recently on Sept. 29, but on Thursday House Republicans held a news conference to insist that the panel meet soon so it can consider evidence presented in the latest indictment.

“It’s time for Mike Madigan to appear before the Special Investigating Committee to offer a defense,” said Rep. Deanne Mazzochi, R-Elmhurst, a member of the committee. “And since he’s indicated he won’t come willingly, it’s time for the committee to meet and vote and issue a subpoena.”

But the committee chairman, Rep. Emanuel “Chris” Welch, D-Hillside, said in a separate statement that he will not be rushed into calling another meeting.

“The federal prosecutor’s indictments against former ComEd associates elaborate on the company’s pattern of behavior as was previously detailed in the deferred prosecution agreement,” Welch said. “They do not, however, give members of this committee carte blanche to substitute partisan grandstanding for deliberate consideration.”