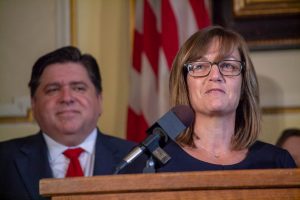 Rep. Katie Stuart, an Edwardsville Democrat and one of the lead sponsors of a bill to raise the minimum wage for public school teachers in Illinois to $40,000 by 2023, speaks at a bill-signing event for the measure Thursday in Gov. J.B. Pritzker’s Springfield office. (Photo by Jerry Nowicki/Capitol News Illinois)

SPRINGFIELD — Some teachers in Illinois will get a pay raise starting next year, thanks to a bill that Democratic Gov. J.B. Pritzker signed into law Thursday, Aug. 22.

House Bill 2078, which passed the General Assembly in the final days of the 2019 session, phases in an increase in minimum teacher salaries to $40,000 a year over the next four years.

“As Illinois’ children head back to school this week and next, this new law says to them and their parents loud and clear, we value teachers,” Pritzker said during a Statehouse news conference.

The bill is aimed at relieving what many have described as a severe statewide teacher shortage in Illinois. During the 2018-19 school year, Pritzker said, roughly 1,500 teaching positions across the state were unfilled.

“We need to start taking this problem seriously and this legislation is a good step toward solving it,” state Sen. Andy Mana (D-Bunker Hill), the chief Senate sponsor of the bill, said in a statement.

According to data from the Illinois State Board of Education, the average salary of a public school teacher in the state was $65,721 during the 2017-18 academic year, the most recent year for which figures are available. But the salaries for individual teachers varies greatly, depending on their location, years of experience, their own level of education and the financial resources of the district in which they teach.

Officials estimate the new law will affect about 8,000 of the state’s 127,000 full-time public school teachers.

Bentley Stewart, a second-year teacher at Crossroads Learning Center in the Jacksonville School District, said during the news conference that she earns about $34,000 teaching students who’ve been suspended or expelled from regular schools. 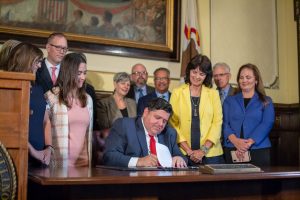 In front of a group of teachers, advocates and lawmakers, Gov. J.B. Pritzker signs a bill in his Springfield office Thursday to raise the minimum wage for public school teachers in Illinois to $40,000 by 2023. (Photo by Jerry Nowicki/Capitol News Illinois)

“It’s a very hard job and teachers don’t mind that, but we also want to be secure in knowing we’ll be able to raise our own families and that our families will be secure,” she said. “This law goes a long way towards that.”

Although passage of the bill will increase costs for some school districts, Pritzker noted that this year’s budget included a $375 million increase in state funding for K-12 education.

According to a fiscal analysis of the bill, the higher minimum salary will add, on average, about 0.5 percent to each district’s “adequacy target” under the state’s new Evidence Based Funding system. It also could widen the gap between current funding and the adequacy target for many districts.

Under that funding system, each district is assigned a target for adequate funding, and those that are the furthest below their target receive top priority for funding increases each year, with the goal of providing adequate funding to all districts by 2027.

State dollars currently account for only about 27 percent of all school funding in Illinois. The bulk of K-12 funding, 66 percent, comes from local property taxes, with the remaining 7 percent coming from the federal government.

According to the state’s most recent data, of Illinois’ 851 public school districts, 702 received less than “adequate” funding during the 2017-18 school year. The percentages of adequate funding vary widely across the state, from a low of 47 percent in the J.S. Morton High School District in Cicero, to a high of 288 percent in the Rondout School District in Lake Forest.

“The districts that benefit from EBF — the evidence-based funding — are in fact the districts where many of the people are getting paid under $40,000,” Pritzker said.