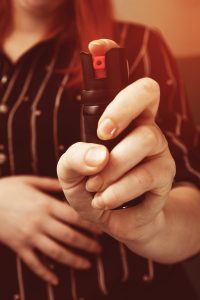 Illinois House Bill 5688 would allow the DCFS employees to carry mace or pepper spray on the job, but also requiring them to complete a training program from the Illinois State Police.

SPRINGFIELD – Republican lawmakers are calling for the passage of legislation that would allow Department of Children and Family Services workers to carry pepper spray for self-defense when investigating allegations of child abuse.

This comes weeks after the death of DCFS investigator Deidre Silas, who died while checking the welfare of six children at a home in Thayer in rural Sangamon County. Benjamin Reed, 32, was charged with first-degree murder in connection with her death.

“It is legal for people to carry pepper spray for their own protection, as many do all over this state. Yet, DCFS workers who have to walk into abusive homes are not allowed that same protection,” Sen. Steve McClure, R-Springfield, the sponsor of Senate Bill 4165, said at a news conference. “This is a commonsense step to help them stay safe while performing what is an incredibly important job.”

Rep. Sandy Hamilton, R- Springfield, filed House Bill 5688 that would allow the DCFS employees to carry mace or pepper spray on the job, also requiring them to complete a training program from the Illinois State Police on the proper use of pepper spray.

McClure said he believes the bill will receive bipartisan support.

McClure is also a cosponsor on a bill to increase criminal penalties for attacking a DCFS worker. Gov. J.B Pritzker has endorsed that effort. Similar efforts failed in 2019 after the death of DCFS worker Pam Knight, who was fatally assaulted during a child protection call in Milledgeville in northwest Illinois.

Rep. Tony McCombie, R- Savanna, also introduced House Bill 3646  that will allow DCFS caseworkers to carry a concealed handgun during the performance of their official duties. 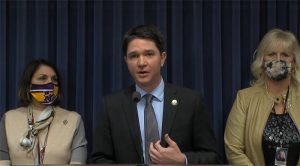 Since 2017, there have been more than 2.5 million visits to homes and 20 documented incidents where a worker was threatened or assaulted, and all of those incidents were reported to local law enforcement, according to information provided by DCFS last month.

DCFS investigators must complete a six-week training that includes worker safety and within the first 90 days of employment must complete workplace and field safety training. In addition, after Knight’s death, Illinois State Police conducted training for DCFS, covering topics such as de-escalation, active shooter response and situational awareness.

Under current rules, an employee should call for law enforcement or take another DCFS worker with them on a call that involves:

During the news conference, McClure said mace or pepper spray might just give a DCFS investigator the few seconds they need to get away from a violent attack.

When asked if adding pepper spray into a situation with children alleged to be abused or neglected could escalate the situation, McClure responded that the pepper spray was to be used for self-defense and training provided by the Illinois State Police would be key.

Sheriff responded to DCFS emergency shelter 161 times in a year