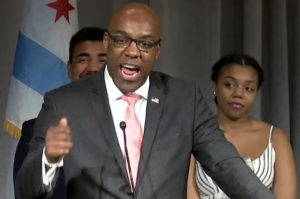 Attorney General Kwame Raoul has announced that phone companies have agreed to adopt a set of principles to fight robocalls following discussions as part of a bipartisan, public/private coalition of 51 attorneys general and 12 phone companies.

The agreement will help protect phone users from robocalls and make it easier for attorneys general to investigate and prosecute bad actors.

“I appreciate the support and assistance from these companies in achieving our mutual goal of stopping robocalls,” Raoul said. “This is a step in the right direction toward solving a pervasive problem that burdens people across the country. Robocalls cost consumers time and money, as well as violate their privacy. I will continue to protect the rights of Illinois consumers by fighting against this illegal practice.”

During the past 18 months, Raoul and the coalition of attorneys general worked with telecommunication companies to investigate technological solutions that voice service providers were designing, developing and implementing to stop robocalls. Based on the meetings, the coalition developed a set of eight principles the phone companies can implement that address the robocall problem in two main ways: prevention and enforcement.

Phone companies will work to prevent illegal robocalls by:

Going forward, phone companies will stay in close communication with the coalition of attorneys general to continue to optimize robocall protections as technology and scammer techniques change, Raoul said.

In June, Raoul, in cooperation with the Federal Trade Commission, announced a crackdown on robocalls that included 94 actions targeting operations around the country that were responsible for more than 1 billion calls. As part of the crackdown, Raoul filed a lawsuit against Glamour Services, LLC; Awe Struck, Inc.; and Matthew Glamkowski, the manager of Glamour Services and president of Awe Struck for allegedly using robocalling and telemarking to solicit home-cleaning services since 2007. In May, Raoul submitted comments to the Federal Communications Commission urging the adoption of proposed rules on enforcement against caller ID spoofing.

Consumers who wish to file a complaint against a company responsible for robocalls can do so on the Attorney General’s website or by calling Raoul’s Consumer Fraud Hotline at 1-800-243-0618.

Information about how consumers can add their number to the Do Not Call registry is also available on the Attorney General’s website.

Joining Raoul in the coalition are the attorneys general from all 50 states and Washington D.C. The companies that joined the coalition are AT&T, Bandwidth, CenturyLink, Charter, Comcast, Consolidated, Frontier, Sprint, T-Mobile, U.S. Cellular, Verizon and Windstream.