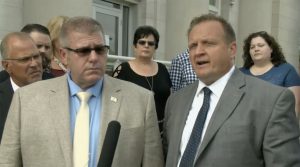 Rep. Darren Bailey (left), R-Xenia, and his attorney, Thomas DeVore, speak to reporters Thursday outside the Clay County Courthouse in Louisville after a judge there ruled that all of Gov. J.B. Pritzker’s executive orders since April 8 pertaining to the novel coronavirus pandemic are void because he exceeded his authority when he used his emergency powers for more than 30 days. (Credit: blueroomstream.com)

SPRINGFIELD — An order Thursday, July 2 by a downstate judge nullifying each of the COVID-19-related executive orders issued by Gov. J.B. Pritkzer the past three months is quickly causing friction between the state and a Republican lawmaker.

Clay County Circuit Court Judge Michael McHaney also expanded his ruling beyond Xenia Republican Rep. Darren Bailey, who filed a lawsuit at the end of April alleging the governor overstepped his authority. That case, as filed, would lift public health-related restrictions for only the representative.

But as they exited the courthouse July 2, Bailey and his attorney, Thomas DeVore, touted the order as freeing the people of Illinois right before the Independence Day weekend.

“This is a good day for accountability,” Bailey told reporters.

But the governor’s office interpreted the ruling differently — Pritzker’s orders are still valid, a spokesperson said in an email, which means provisions in the state’s reopening plan are still enforceable.

McHaney’s ruling in Bailey’s case is only one decision among multiple related lawsuits filed across the state, the spokesperson pointed out. But, DeVore responded, In many of those cases judges in state and federal courts ruled only on the question of whether to temporarily suspend enforcement of restrictions.

“Based on what’s been seen,” University of Illinois professor Scott Szala said, McHaney’s decision Thursday “certainly leaves the law uncertain.” As indicated by a statement from Pritzker’s administration, the attorney general’s office was likely to appeal the order on Monday.

The judge wrote he “declares any executive orders in effect after April 8, 2020, relating to COVID-19, and finding their authority under the emergency powers of … the (Illinois Emergency Management Agency Act) are void.”

But, Ann Lousin, professor at the John Marshall Law School, said McHaney has authority in only his judicial district, not the entire state. At the very least, his ruling applies to residents in Clay County.

This issue of competing court orders in response to lawsuits challenging the legality of Pritzker’s response to COVID-19 will need to be addressed by the Illinois Supreme Court, she added.

Szala agreed that the state’s highest court “is going to have to sort this out.”