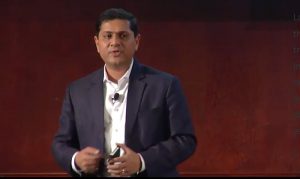 A year ago, the State of Illinois launched a project to consolidate a “patchwork of IT systems” under a single centralized Information and Technology department.

“[W]e have hundreds of independent separate financial reporting systems throughout our state government,” said Gov. Bruce Rauner in January 2016. “They don’t interact with each other, and it’s one of the reasons our audits take many, many months to complete and are filled with hundreds of millions of dollars in accounting errors.”

As 2017 begins, Illinois has consolidated IT functions throughout state government into the Illinois office of Innovation and Technology (DoIT). Under Chief Information Officer Hardik Bhatt, the DoIT consolidated 86 different departments and allowed the state to eliminate redundant services and systems. The consolidation was also meant to improve cyber-security statewide.

“Illinois is aggressively reducing the 45 years of technology debt in only four years by acting boldly and strongly engaging the private sector and other partners in this effort,” said Bhatt in a press release. “We have the opportunity to leapfrog from legacy technology to global leadership, by getting a head start in becoming a smarter state.”

Some of the ideas that may com to fruition in 2017 include:

An example of “smart city” technology is explained by Chicago author and engineer Anil Ahuja as a way to think of the future of  “400 miles of streets, 300 bridges, 300 traffic lights, 300,000 street lights, red light enforcement cameras and more,” Ahuja said in a recent essay.

By building in “advanced traffic management systems” (ATMS), during infrastructure repairs, the city can collect data that can be used to divert traffic, control traffic lights or communicate with driverless cars. Ahuja said CTA travel can be updated with connective technology that lets vehicles communicate with riders and each other.

“Chicago needs to focus on smart infrastructure, to prepare roads and public transportation for the future of technology,” Ahuja wrote.

Find our more about the DoIt at the website: https://www2.illinois.gov/sites/doit/Pages/default.aspx

— ‘Smart’ technology ‘leapfrog’ set to give Illinois an edge —