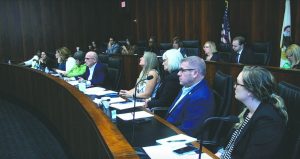 Illinois lawmakers listen during a hearing Tuesday in Chicago as state Medicaid and child welfare officials outline plans to shift children who are in state care into a managed care form of health care coverage. (BlueRoomStream)

SPRINGFIELD — The state of Illinois is about to overhaul the way it provides health care to an estimated 74,000 of the state’s most vulnerable children and young adults, and the prospect of that is making many lawmakers and health care providers nervous.

At issue is a plan by the Department of Children and Family Services to place all of the children under its charge into a single managed care health insurance program, similar to those that now manage the bulk of the state’s Medicaid program, by Nov. 1.

Those involved will be an estimated 17,100 children in foster care, another 18,800 former foster children who still receive health coverage from the state, plus another 38,200 children with special needs that qualify them for federal Supplemental Security Income benefits.

Managed care is a system in which private insurance companies, known as managed care organizations, or MCOs, are paid a flat, per-patient monthly fee to manage the health care of Medicaid patients. In Illinois, it has been the source of controversy, especially among health care providers who have complained about late reimbursement payments, high rates of claim denials and lengthy appeal processes to resolve claim disputes.

“I want to acknowledge that we’ve had some growing pains with managed care in Illinois,” Theresa Eagleson, director of the Department of Healthcare and Family Services, the agency that administers Illinois’ Medicaid program, told lawmakers during a hearing Tuesday in Chicago.

Eagleson, along with Leslie Naamon, president and CEO of IlliniCare Health, the company selected to run the program for DCFS children, tried to assure lawmakers they are trying to work out those issues before the new program launches.

“The idea is not to get to an appeal,” Eagleson said. “The idea is to get these kids to stability, safety, permanency, the right level of care each and every time they need care. I am totally committed to that goal.”

A spokesman for the Department of Healthcare and Family Services said plans to shift foster children and other “youths in care” into a managed care health system began about two years ago, about the same time the state was expanding managed care to the regular Medicaid population statewide.

That decision, the spokesman said, was made during former Republican Gov. Bruce Rauner’s administration and was not specifically mandated by the General Assembly.

In fact, some lawmakers indicated Sept. 10 they were just beginning to learn about the transition, and some, like state Rep. Celina Villanueva (D-Chicago), said they were not comforted by what they were hearing.

“I don’t need fluff. I need answers,” Villanueva said. “I acknowledge that this is new and this is unique, and that in and of itself is great. But with that also comes the situation where DCFS right now is not in the best light.”

A number of lawmakers also questioned whether managed care would be appropriate for those children and young adults because of the number of times they are moved from one setting to another. And they expressed particular concern about the children who age out of the system, many of whom lose contact with state officials and therefore may never learn about their health care options.

Meanwhile, Dr. Edward Pont, a pediatrician who practices in DuPage County, urged state officials to delay the scheduled Nov. 1 start date for the new program. He said he was concerned that a managed care system could severely restrict those children’s access to certain kinds of health care because not all providers will be in the insurance company’s network.

“The decision to mandate that all wards (of the state) go into a single MCO will limit access,” Pont said. “Many providers now taking care of these wards may not be aware of the transition.”

The Sept. 10 hearing was for discussion purposes only and no action was taken. But many lawmakers who were present indicated they wanted to be kept informed as the scheduled start date approaches.