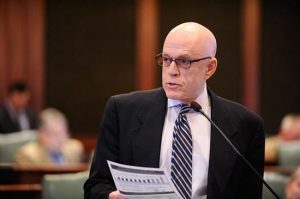 Former Speaker Michael Madigan appointed Harris to be the chief budgeteer during the Rauner administration. Harris, the second-ranking Democrat in the House, announced in November that he would not seek re-election after the completion of his current term this year. Harris said he will share his knowledge and experience of the budget process with the team to “pass the mantle.”

Harris will lead the group rounded out with Reps. Will Davis, D-Homewood; Elizabeth Hernandez, D-Cicero; Mike Zalewski, D-Riverside; and Robyn Gabel, D-Evanston, during this legislative session.

“We have made great progress putting Illinois on the path toward financial stability,” Welch said in a statement. “With the stewardship of Leader Harris and this incredibly diverse group of state representatives, I am confident we will have a fiscally responsible budget that prioritizes the needs of hardworking Illinoisans.”

The budget negotiation team will meet with caucuses and then work with the Gov. J.B. Pritzker’s office to determine priorities for the next fiscal year.

“We want to be sure that the issues affecting Illinois families from all over the state are reflected,” Harris said.

Harris said those would include school funding, funding to keep seniors in their homes with supportive services, mental health and addiction services, college and university funding, and public safety, Harris said.

Budgetary planning is complicated by the COVID-19 pandemic, too, Harris said.

“When we passed the current budget earlier this year, things were opening up and looking good,” he said. “Now, we have omicron and we have to stand back and see where we are and where this will go.”

Davis serves as the chairman of the House Appropriations-Elementary & Secondary Education Committee. Hernandez led redistricting efforts in the House and is a member of the Revenue and Finance Committee, as well as House Appropriations for Elementary and Secondary Education and Higher Education. Zalewski serves as chairman of the House Revenue Committee. Gabel will take a lead role in the House’s budgeting process due to her leadership on many major legislative initiatives, particularly those focused on Medicaid reform and affordable health care.