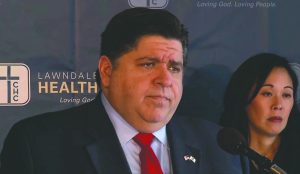 Gov. J.B. Pritzker responds to questions about a report from the Chicago Tribune and ProPublica, which detailed the use of isolation rooms to discipline children in Illinois. Pritzker took the questions at an unrelated news conference at the Lawndale Christian Health Center in Chicago. (Illinois Department of Central Management Services photo)

SPRINGFIELD — The state’s board of education announced emergency rule changes Nov. 20 in response to a news story which detailed an overuse of “isolation rooms” in several Illinois public school districts, including those serving students with special education needs.

That news investigation, published by the Chicago Tribune and ProPublica Nov. 12, analyzed thousands of pages of records from Illinois schools which showed “every school day, workers isolate children for reasons that violate the law.”

There were more than 20,000 documented incidences of isolation used in the state from the start of the 2017-18 school year through December 2018, according to the report, which also relied on more than 120 interviews to detail the harrowing experiences of the children involved.

“The students, most of them with disabilities, scratch the windows or tear at the padded walls. They throw their bodies against locked doors. They wet their pants. Some children spend hours inside these rooms, missing class time. Through it all, adults stay outside the door, writing down what happens,” according to the report.

In Illinois, it is legal to isolate students if they pose a safety threat to themselves or others, the report found, but the practice is used far more than in such situations.

“Children were sent to isolation after refusing to do classwork, for swearing, for spilling milk, for throwing Legos. School employees use isolated timeout for convenience, out of frustration or as punishment, sometimes referring to it as ‘serving time,’” according to the report.

The report also found that while schools must document isolation instances, that documentation often goes unread, and the Illinois State Board of Education, or ISBE, does not collect any data on the practice.

On Nov. 20, ISBE announced the implementation of emergency rules to “end the use of isolated seclusion in Illinois schools.” A news release said the changes would be made at the request of Democratic Gov. J.B. Pritzker.

“That story, and what’s happened according to that story, are appalling,” Pritzker said of the ProPublica Tribune report at an unrelated news conference Wednesday morning. “… Upon reading it, my entire governor’s office and our administration began to move against that.”

The ISBE release said the board will ban the use of isolated seclusion in “any educational entity serving public school students in Illinois,” and will begin collecting data to “increase accountability and transparency for all instances of timeout and physical restraint.”

According to the release, the board will amend rules to allow timeouts with a trained adult in the room and with an unlocked door, “but only for therapeutic reasons or protecting the safety of students and staff.”

The new rules will ban physical restraints that “could impair a student’s ability to breathe or speak,” and will institute strict parameters under which restraint is allowed. The board will also collect data of any instances of physical restraint or timeouts being used during the current and past two school years.

In the future, educational entities will be required to submit data to ISBE within 48 hours of any instance of physical restraint or timeout being employed.

School districts will also now be required to provide detailed information to parents and guardians when timeout or physical restraint is used. Regional Offices of Education will also begin to monitor the timeout spaces during regular monitoring.

Per the release, the governor’s office will file a complaint “on behalf of all known cases of isolated seclusion” to expedite the investigative process. After that, ISBE will determine whether the educational entity violated federal or state special education requirements.

The news release said the board would also work with lawmakers to address the issue legislatively.

One member of the General Assembly, Democratic Rep. Jonathan Carroll of Northbrook, posted an emotional story to his website about his personal experiences with “quiet rooms,” and said he would do all in his power to end the practice.

“Trust me, I know first-hand how painful being isolated can be. My childhood was very difficult. I was diagnosed with ADHD at a time where people still didn’t quite understand the disorder. There were many interventions used including isolation timeouts in a locked closed space,” Carroll wrote. “I am 45-years old and still have nightmares because of this treatment.”

Carroll wrote that he can recall “every detail from the smell, lighting and texture of the carpeted walls,” during his time spent isolated as a child.

“Isolation was my personal Hell,” he wrote. “I begged my parents to take me out of that school and when they did, it changed my life. My struggles didn’t go away, but I learned better coping strategies without having to be isolated.”

Carroll said he would draft legislation to ban the practice in Illinois. According to the ProPublica and Tribune report, 19 states have already banned isolation, although there are no federal laws prohibiting the practice.