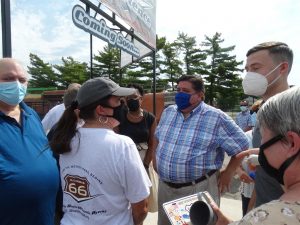 Gov. J.B. Pritzker talks with Casey Wichmann, Route 66 Scenic Byway executive director, after a ribbon cutting ceremony Friday, Aug. 13 to mark the opening of a new exhibition at the Illinois State Fair in Springfield commemorating the iconic highway and the places in Illinois that it passed through.(Capitol News Illinois photo by Peter Hancock)

SPRINGFIELD – The state of Illinois is teaming up with the Community Foundation for the Land of Lincoln to develop a master plan for year-round use of state fairgrounds facilities in Springfield and Du Quoin.

Gov. J.B. Pritzker and Department of Agriculture Director Jerry Costello II made that announcement Friday, along with John Stremsterfer, president and CEO of the foundation.

“Today, we honor the legacy of paving an even better path forward for these fairgrounds for generations to come,” Pritzker said during a news conference early Friday morning Aug. 13 outside the Department of Agriculture building next to the Springfield fairgrounds. “That’s our intention. That’s what our state fair advisory board is tasked with.”

The first Illinois State Fair was held in Springfield in 1854, according to the fair’s own website. For several years afterwards it moved to a number of different communities before settling at its permanent location on the capital city’s north side in 1894.

Like other state fairs, it serves as a kind of harvest festival and a celebration of the state’s agriculture industry, which Costello describes as Illinois’ largest industry that contributes about $19 billion annually to the state’s economy.

In 1923, a group of businessmen in the southern Illinois town of Du Quoin, in Perry County, launched a competing fair in an effort to attract visitors specifically from that region. It was later acquired by the state and has been operated by the state since 1986.

The larger state fair in Springfield typically draws more than half a million visitors during its two-week operation, while the Du Quoin fair has been drawing about 100,000 in recent years.

Both fair sites also host other events occasionally throughout the year, but Stremsterfer, who grew up just blocks away from the Springfield fairgrounds, said the idea is to turn them into year-round venues. 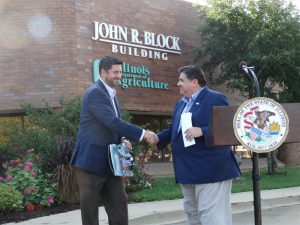 Gov. J.B. Pritzker and John Stremsterfer, president and CEO of the Community Foundation for the Land of Lincoln, announce a partnership to develop master plans for year-round use of state fairgrounds in Springfield and Du Quoin.(Capitol News Illinois photo by Peter Hancock)

“It’s such a great asset for the people in the state of Illinois. I think we all want to be proud of everything that in the state, but especially the property that we’re all responsible for our citizens,” he said. “And I think nothing exemplifies that more than the State Fairgrounds.”

That announcement came on the second day of the 2021 state fair after many of the opening-day events, including a Grandstand concert by rock musician Sammy Hagar, had to be canceled due to a violent storm that swept across central Illinois Thursday. That storm resulted in significant flooding in Gibson City, a town of about 3,000 people roughly 100 miles northeast of Springfield.

But Pritzker, along with Lt. Gov. Juliana Stratton, made up for lost time Friday by attending several events at the fair.

Among them was a ribbon cutting ceremony to mark the start of a new attraction at the fair that is still under development, the “Route 66 Experience” that will commemorate the nation’s first transcontinental highway, which stretched from Chicago to southern California.

The project is planned as a walking tour that will feature exhibits representing many of the towns and attractions in Illinois that travelers on the roadway would have seen, from Chicago to the Chain of Rocks Bridge just north of St. Louis. The project is expected to be completed by 2026, in time to mark the 100th anniversary of the highway.

“I think about Route 66. I think about how it was built to create opportunity,” Stratton said during the ceremony. “But that wasn’t always available to everyone. I think about Black people like those in my family who traveled Route 66 but had to carry a Green Book with them because, due to Jim Crow, they could not stop where they wanted to eat, get a cool refreshing beverage, or to get some lodging or get gas for their cars.”

She said the project will foster “conversation about the Mother Road, about the challenges that have been presented, but also the opportunities that were presented.”

Pritzker and Stratton also attended a ribbon cutting ceremony to open Conservation World, a 30-acre park staffed by the Illinois Department of Natural Resources that features a large aquarium stocked with sport fish that are popular in Illinois, several educational programs and an outdoor amphitheater with live music.

The fair runs through Aug. 22. Additional details can be found at the fair’s website, Illinois.gov/statefair.