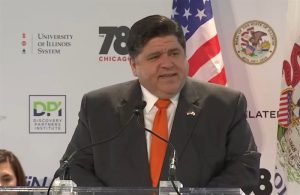 Gov. J.B. Pritzker speaks at the future site of the Discovery Partners Institute, one of 15 state hubs of a University of Illinois-led public-private research institute network that will receive portions of $500 million in state infrastructure spending. (Illinois.gov photo)

SPRINGFIELD — Gov. J.B. Pritzker on Feb. 12 touted statewide benefits he said will result from a $500 million state investment in 15 hubs of a University of Illinois-led public-private research institute network.

Pritzker, a Democrat, announced at a Chicago news conference on the site of one of the future developments that the state would release the funding, which was originally approved under former Republican Gov. Bruce Rauner and reauthorized in last year’s state operating budget.

The money is for the planning and construction of the Discovery Partners Institute — a public-private research and development and workforce development hub led by the UI — and 14 other hubs of a statewide program.

“Today’s announcement is so exciting. It will fast-track construction planning and we hope to break ground for DPI in a few months,” said UI President Timothy Killeen.

The DPI campus will receive $230 million of the $500 million state investment and will be located in Chicago’s South Loop in a development area known as The 78, so named because the real estate developer, Related Midwest, has plans to make it the city’s 78th neighborhood.

Pritzker said through another UI-led program — the Illinois Innovation Network, or IIN — the investment’s economic impact will be felt statewide. The IIN is a network of DPI and another 14 regional hubs which will receive portions of the other $270 million in state funding.

Those hubs include partnerships with all of the state’s public universities, which will each create specific programs and facilities that fall in line with the IIN’s and DPI’s innovation, workforce development and economic growth goals. The stated goal of the program is to train the state’s workforce for in-demand technology jobs.

Pritzker said making Illinois a hub for technological innovation will make it a more desirable place for students specializing in technological fields to start their careers after college graduation.

“Through the Illinois Innovation Network, DPI’s success will radiate across the state to 15 hubs from Chicago to Rockford to Peoria to Edwardsville,” Pritzker said. “We are investing in workforce development and innovation and (Research) and (Development) all across our state.”

Chicago Mayor Lori Lightfoot echoed the governor and said the project could be “a game changer” for the city, which will also be making improvements to the area surrounding the new facility. She said it will help the city and state retain students upon graduation.

“The problem is after we train and educate our students…they leave,” she said.

“Today is about turning all of that around,” she said.

According to DPI’s website, programs at the facility “will initially focus on our economy’s existing strengths: data analytics and computing, and their applications in food and agriculture; health and wellness; finance and insurance; and transportation/logistics. All of these industries have a strong Fortune 500 presence in the state.”

DPI has been operating out of temporary space in downtown Chicago, offering classes and hiring staff. Its leader is UI alum William Jackson, who is the former president of the Milwaukee-based Johnson Controls, which produces building-security, climate-control and HVAC equipment, and fire-suppression products.