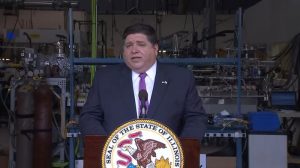 Gov. J.B. Pritzker made that announcement Tuesday, Oct. 27 in Champaign at an event highlighting the state’s manufacturing industry.

“Manufacturing is as much our future as it has been of our past. It’s a leading driver in our economy with more than $100 billion of annual economic output,” Pritzker said, adding that items manufactured in Illinois can be found in over 200 countries worldwide.

Funding for the new training academies will come through the Illinois Department of Commerce and Economic Opportunity, which issued a notice of funding opportunity on Tuesday. The agency is seeking proposals from community colleges to provide cutting-edge training programs that will equip students for an array of high-paying skilled manufacturing jobs that require specialized training.

Pritzker and DCEO Director Erin Guthrie made the announcement at the Eden Park Illumination factory in Champaign, a company that manufactures UV lighting systems that are used in a variety of industries. The company evolved out of research by two University of Illinois engineering professors.

Guthrie noted that Eden Park has grown rapidly in recent months, creating a large number of new jobs in the Champaign area.

“However, they need help with the hiring to fill the demand they have both for their customers and as they make product advancements and innovate,” she said. “The same is true for many of other Illinois companies that we’ve heard from. The need for skilled manufacturers is a big one and it weighs heavily on them as they plan for the future.”

Despite the decline of manufacturing nationally, Guthrie said it is still the largest contributor to the state’s economy, employing more than 500,000 workers and accounting for $60 billion in exports annually.

But David Boulay, president and CEO of the Illinois Manufacturing Excellence Center, said rapidly changing technology in the industry is making it challenging for manufacturers to find the skilled labor they need.

“Worker skills really are expiring like never before,” he said. “Automation, artificial intelligence, collaborative robots are creating massive change in the workplace. And even during this pandemic, we are seeing the signs of that massive change accelerated.”

“As Illinois’ largest workforce training provider, community colleges statewide have the expertise to partner with local communities to help guide our residents on the path to meaningful careers through these new facilities,” Brian Durham, executive director of the Illinois Community College Board, said in a news release. “Manufacturing remains an important and growing industry for our state, and we are poised, with the right investments, to ensure more Illinoisans get the opportunities they need to train for these 21st century jobs.”