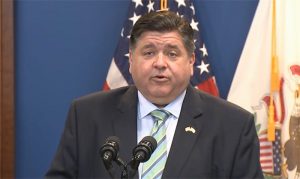 Gov. J.B. Pritzker announces a plan Tuesday, Sept. 27 for the state to pay down $450 million of its outstanding $1.8 billion Unemployment Insurance Trust Fund debt to the federal government. (Blueroomstream.com)

The trust fund is the pool of money paid into by employers to provide a social safety net for unemployed individuals. The employer’s insurance premiums are essentially collected via payroll tax.

The “deficit” figure represents money Illinois must repay to the federal government. It was borrowed under Title XII of the Social Security Act so the state could continue to pay unemployment claims amid the COVID-19 pandemic and is accruing interest at a rate of 1.59 percent annually.

While that balance exceeded $4.5 billion as the unemployment rate reached 16 percent at the height of the pandemic, lawmakers in March dedicated $2.7 billion in federal American Rescue Plan Act funding to pay down the deficit to the balance of roughly $1.8 billion. While Democrats lauded that action as a stop gap to allow for continued negotiations on the trust fund deficit, Republicans criticized the majority party for not allocating more of the state’s $8.1 billion in ARPA funds to the deficit.

The $450 million announced Tuesday will bring the deficit below $1.4 billion.

“Our unemployment system is back on track and the balance of the unemployment trust fund continues to experience strong and steady growth,” Pritzker said Tuesday at a news conference in Chicago. “Thanks to Illinois’ economic recovery, the Illinois Department of Employment Security has advised me that the UI trust fund balance is sufficient enough to pay down another $450 million of its pandemic related debt.”

Pritzker said he expects the move to save the state about $10 million in interest costs.

Last week, the state announced unemployment rates were down from one year ago in all 14 metro areas, ranging from 3.8 percent in the Moline and Rock Island area to 6.8 percent around Decatur.

Pritzker said business and labor interests continue to negotiate a solution for reducing the deficit further. But they’re approaching a Nov. 10 deadline after which federal tax hikes would take effect if the balance isn’t erased by that date.

That process is spelled out in the Federal Unemployment Tax Act, or FUTA.

Federal law requires an employer to pay a FUTA tax on an employee’s first $7,000 of wages at a rate of 6 percent. But it also offers businesses a 5.4 percent tax credit, putting the effective rate at 0.6 percent.

If a state has a negative balance in the trust fund on Jan. 1 for two consecutive years – as Illinois has had – it has until Nov. 10 of the second year to retire that deficit, or the federal government will start clawing back 0.3 percent of the FUTA tax credit from employers each year until the deficit is gone.

A spokesperson for the Illinois Department of Employment Security said in March that the tax credit reduction would apply to businesses for the 2022 tax year if a balance remains in place on Nov. 10. That would drive the effective FUTA tax rate from 0.6 percent to 0.9 percent, an increase of $21 in federal taxes per employee.

In the past, negotiations in Illinois have been part of an “agreed bill” process in which labor interests identify cuts they are willing to accept, and business groups offer means of increasing trust fund revenues.

The solution to a $2.3 billion hole in 2010 amid the Great Recession included benefit cuts and raised premium rates for employers. Lawmakers also dedicated a portion of those premiums as a revenue stream to pay back 10-year bonds, which they used to replenish the trust fund. Those bonds were paid back in about 7.5 years, and the trust fund was back above water by 2012, according to IDES.

Illinois lawmakers have not yet adjusted the tax rates on employers or cut benefits for claimants since 2020. Instead, they’ve pushed back statutory rate hikes and benefit cuts multiple times, scheduling them to take effect Jan. 1 if lawmakers can’t come to a compromise.

Pritzker said negotiations for a broader fix are ongoing. But lawmakers are not scheduled to return to the Capitol until Nov. 15.

“As the economy continues, stabilized, we believe that we’ll be able to reduce that even more in the agreed bill process, working with the legislature, we’ll be able to pay it off by year end,” he said.

While Pritzker described the crush of unemployment claims amid the pandemic as a nationwide strain on unemployment systems, as of Tuesday, Illinois was one of five states and the U.S. Virgin Islands that had an outstanding trust fund balance, according to the U.S. Treasury.

Other states included California at $17.8 billion, New York at $7.9 billion, Connecticut at $97 million, Colorado at $33 million and the Virgin Islands at $96 million