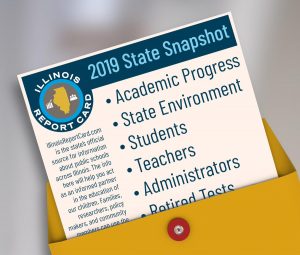 Nearly half of the students in the Glendale Heights school district are Hispanic and more than one-third of its students are English language learners. Yet the district continues to succeed with sizable student growth in language arts and math. None of the district’s schools is ranked below “commendable,” the second-highest designation given out by the Illinois State Board of Education, and one of its schools, Glenside Middle School, earned “exemplary” status, putting it in the top 10 percent of all school districts in the state.

Queen Bee’s achievements are just one of the highlights in the 2019 Illinois School Report Card, giving detailed academic and financial information on individual school districts.

“I am energized for the future of Illinois schools,” state Superintendent of Schools Carmen Ayala said when unveiling the School Report Card data.

A total of 398 schools — 332 elementary schools and 66 high schools — in the state earned “exemplary” status. To earn “exemplary” status, an elementary school must have no student score below 80.12 percent on standardized testing. High schools can have no student score below 85.77 on standardized testing to earn the top status.

The number of local schools earning “exemplary” status were (by county):

Ayala said she is proud that for the fourth year in a row, the number of Illinois students taking remedial classes at community colleges in the state has declined as student demographics continue to change.

“Illinois’ gains demonstrate that each and every child can succeed when provided the rigor, resources, and academic and social-emotional support they need. Illinois’ future is bright and compares strong nationally.”

The recently released School Report Card data shows that Illinois’ four-year graduation rate held steady at 85.9 percent. Data from 2017, the most recent year available for national graduation rates, shows Illinois ranking in the top half of all states.

“Illinois is committed to boosting graduation rates, especially for students of color,” Ayala said. “While 91 percent of our white students graduate, that rate drops to 82 percent for our Hispanic students and 76 percent for our black students.”

The state superintendent noted that Illinois’ measure of high school freshmen on track to graduate held steady in 2019 as well. She noted that Illinois schools will continue to boost graduation rates by actively intervening with freshmen at risk of falling off track and providing individualized supports and interventions. Research from the University of Chicago shows students who have earned at least five full-year course credits and have earned no more than one semester ‘F’ in a core course are almost four times more likely to graduate.

Ayala said that high school juniors’ mean SAT scores in both reading/writing and mathematics compare to or exceed those of Michigan and Colorado, two other states with universal Scholastic Aptitude Test administration. Illinois this year began providing the Preliminary SAT 8/9 and PSAT 10 to all high school freshman and sophomores, respectively, to further prepare students for success on the junior-year college admissions exam.