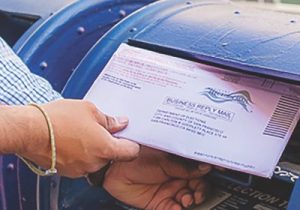 SPRINGFIELD — The Illinois House passed a bill Thursday, March 18 that would make permanent some vote-by-mail and curbside voting expansions that the state adopted ahead of the 2020 presidential election due to the COVID-19 pandemic.

House Bill 1871, sponsored by Democratic Rep. Katie Stuart, of Edwardsville, passed 70-41, and takes effect immediately. Under the bill, Illinois can use federal funds distributed to states for election administration through the 2002 Help America Vote Act to create and maintain secure collection sites for mail ballots.

It would not require local election officials to mail or email vote-by-mail ballot applications to voters who cast a ballot in previous elections. This measure was included in the previous vote-by-mail law for the 2020 general election but will not be extended.

Curbside voting, which allows for an individual to fill out a ballot from their vehicle in a designated zone outside the polling place, would be allowed in all elections for certain persons, if local election authorities choose to use them. If enacted, the legislation would allow for voters with temporary or permanent disabilities to engage in curbside voting on Election Day or on early voting days.

The bill would also expand mail voting by mandating that all election authorities accept a mail ballot even if it is returned with no postage or not enough postage. 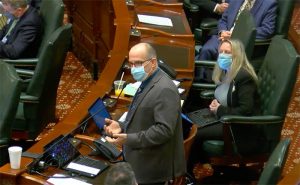 Rep. Mark Batinick, R-Plainfield, speaks on the House floor Thursday in opposition to a bill that expands vote by mail and curbside voting in the state. The bill passed the House 70-41. (Capitol News Illinois photo)

Some House Republicans took issue with the bill’s requirement that the Illinois State Board of Elections provide guidance, rather than rules, for securing collection sites.

Rep. Tim Butler, a Republican from Springfield, said the bill’s provision that the collection sites be secured with locks, which may only be opened by election authorities, does not go far enough to protect election ballots.

“I think here in Illinois, we need to set in statute or give much more authority to the elections board to come up with rules to do these the right way,” Butler said. “We need to make sure that everyone has the best access and the right to vote, but we must also make sure that our elections are totally secure, and in this age, we have dangers from all over the place trying to tamper with our elections.”

Republican Rep. Mark Batinick of Plainfield said the bill should clarify where drop boxes can be permitted in order to prevent local election authorities from using drop box locations to impact the outcome of an election.

“If somebody is going to put a drop box only in Democratic precincts, or only in Republican precincts, you can easily tip the scale of a local election. It is going to be very easy to use this process because we have no standards as to where these drop boxes have to go. An enterprising clerk can take advantage of this and tip the scales one way or another. That’s why we’re looking for standards. Imagine what’s going to happen if somebody does that. People are going to feel disenfranchised,” Batinick said.

House Republicans also raised the question of whether federal HAVA funds can be used by election authorities to secure and maintain drop boxes when the election is local, such as the consolidated elections set on April 6.

Matt Dietrich, a spokesperson for the state Board of Elections, said HAVA funds can’t be used to purchase new drop boxes as those funds are only for election security.

“What HB 1871 would do is allow jurisdictions that already purchased drop boxes for the 2020 General Election to continue using them in future elections. When the special 2020 election law expired, there was no provision in the Election Code that allowed for use of drop boxes,” Dietrich said in an email.