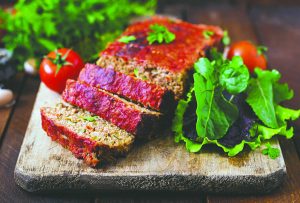 I know that serving a well-seasoned meatloaf covered with a flavorful tomato sauce, a mound of creamy mashed potatoes and a crisp green salad will make my father and my husband happy on Father’s Day, or any day of the year. (Depositphotos)

During stressful times like these, I’ve grown to have an added appreciation for the two men who have been pillars of love and support in my life, my dad, Howard, and my husband, Michael. I was blessed to be raised in a home with my diligent, book-loving father and my wonderful mother.

My husband also was a wonderful daddy for our daughter, and lovingly filled the father role for my granddaughter and numerous other children when he worked as a tutor and substitute teacher. There are many other men who are “fathers of the heart,” if not actual fathers, and they also should be celebrated on Father’s Day.

If you’ve ever wondered how Father’s Day got its start, we have Sonora Louise Smart Dodd to thank. When Sonora was 16 years old, her father became a widower and was left to raise Dodd and her five younger brothers alone. In 1909, Dodd was listening to a Mother’s Day sermon at church when she realized the need for a day to celebrate fathers, especially her own.

Sonora started a petition to celebrate the first Father’s Day in early June to coincide with her father’s birthday. Unfortunately, only two people signed up. Finally, after moving to a date later in the month, Sonora was able to convince several churches to participate.

The first Father’s Day celebration was held in Spokane, Washington. Families honored fathers by wearing roses — red for those still alive, and white for those who were deceased. The city’s mayor and even the state’s governor issued Father’s Day proclamations to commemorate the occasion.

Not satisfied with just a local celebration, Sonora spent decades traveling around the United States to campaign for a national holiday. Despite Sonora’s enthusiastic efforts, Father’s Day wasn’t nationally recognized until 1972.

In 1970, Congress finally passed Joint Resolution 187, which called on citizens to “offer public and private expressions of such day to the abiding love and gratitude which they bear for their fathers.” President Richard Nixon signed the resolution into law two years later.

There isn’t enough money in the world to show my father and my husband how much I appreciate the love and care that they’ve given to me and our family. And while they don’t really need anything in the way of gifts, they both love meatloaf dearly.

I know that serving a well-seasoned meatloaf covered with a flavorful tomato sauce, a mound of creamy mashed potatoes and a crisp green salad will make my father and my husband happy on Father’s Day, or any day of the year. Have a wonderful Father’s Day!