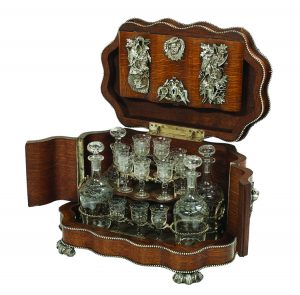 This oak 19th-century “cave a liqueur” is decorated with silvered mounts of hunting dogs. It sold at New Orleans Auction Galleries for $4,250. (Kovels)

Antiques are given many names, often changed to be written in a new language or used in a different way, and there can be confusion. Is a “cave a liqueur” the same as a tantalus? Both have decanter bottles; both have drinking glasses; both can have locks; and both are used to serve liquor to guests, one usually before dinner, the other during and after a meal. In the past, formal service of alcoholic drinks, especially at banquets and special-occasion dinners, was important. The tantalus bottles held liquor, a distilled alcoholic drink like scotch. And it should be easy to remember that a cave a liqueur held — what you would expect — liqueur, an after-dinner fermented sweet drink like brandy, flavored with fruit or spices. The names sound alike but are spelled differently.

The two containers and contents follow formal rules of design. The tantalus has decanters in an open rack with tops that are locked, opening only with a key. The tantalus was named for Greek King Tantalus, who was condemned to stand in a pool of water in Hell and never be able to get a drink. The cave a liqueur holds small decanters and glasses suitable for the small after-dinner drink. Both of the serving boxes were large, often made of wood with added brass or other metal decorations and gold-painted accents. They were very much in style from 1850 to 1900. The 11-inch-high box pictured holds four decanters and 16 liqueur glasses.

There are many jokes about the locked liquor supply, but it seems possible that the locks were meant to keep the household help from taking drinks and leaving empty decanters or adding water or other liquid.

Q: I have several calendar plates in mint condition from the 1960s, ‘70s and ‘80s. How can I find out how much they are worth and how to sell them?

A: Calendar plates were popular between about 1906 and 1929. Many were given away by stores and other businesses as advertising. Some list the year in the center surrounded by a wide border picturing a calendar “page” for each month. Others have a scene or attractive picture in the center. There was renewed interest in yearly calendar plates in the 1970s to ‘90s. Calendar plates are still being made but aren’t as popular now. Check websites to see what plates like yours sell for. The year is as important as the picture when determining price. Most sell for $5 to $30.

TIP: All Vogue and Ginny dolls are marked. If you own an unmarked doll, it is not a real Ginny.