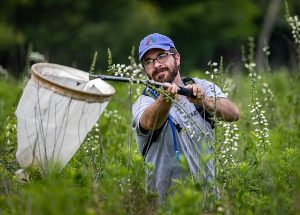 It’s hot and the key to the gate doesn’t work, but I can see the deep shade of mature woods and a swath of tall prairie plants just beyond the fence. Heavy clouds hover to the north and east, and a distant rumble warns of potential rain.
“Looks like you’re going to get the full prairie experience,” Tommy McElrath says.

He makes a phone call, and we climb over the gate. To our right is Trelease Woods, a remnant 65-acre patch of old-growth forest owned by the University of Illinois at Urbana-Champaign.

To the left, a slice of restored prairie. Beyond these wild areas looms the kind of development that dominates most of rural Illinois: a few houses, agricultural fields, random thickets of brush and trees – and not much else.

This remnant of ancient forest and managed prairie is home to a host of insects. We’re here to get a glimpse of what’s left of the 18 species of bumble bees recorded here in decades past.

The rusty-patched bumble bee, Bombus affinis, was once common in Champaign County, but hasn’t been found in at least four years and now is listed as federally endangered. All rusty patched bumble bees were handled in accordance with permits from the U.S. Fish and Wildlife Service, state and local authorities.

McElrath is the insect collection manager of the Illinois Natural History Survey. He’s not a bee expert – his specialty is beetles. But he and a colleague, INHS scientist Jason Robinson, were drafted into bumble bee surveillance to fulfill a contract with the Illinois Department of Transportation for a few parcels in northern Illinois affected by road and highway construction projects. These parcels may or may not be prime habitat for bees. But if something rare turns up, like the endangered rusty-patched bumble bee, Bombus affinis, IDOT might alter its plans.

Trelease Prairie, which abuts Trelease Woods, is not on the IDOT list of sites. But it makes a good training ground. McElrath has spent hours out here capturing, identifying, collecting and releasing bees. The rusty-patched bumble bee was reported here a few years ago but hasn’t been seen in Champaign County since.

We veer out into the tall prairie vegetation and McElrath swoops at a bee hovering near a false sunflower – one of the only plants in bloom just now. He captures the bee in his net.

“Bees tend to fly up, so I hold the bottom of the net up,” he says after he fishes a small plastic container out of a cloth shopping bag tied to a belt loop on his hip. The bee flies upward in the net. He quickly scoops it into the container and snaps a lid on it.
“This is a male Bombus griseocollis, a brown-belted bumble bee,” he says. This is the most common bumble bee here now. The captured bee goes into the bag, and McElrath lunges after every other bumble bee he sees.

The INHS natural areas coordinator arrives to unlock the gate for us, and we drive down a grassy path to the southern end of the woods. Trelease Prairie was once plowed under, but was restored to prairie in the early 1940s. There aren’t a lot of flowers in bloom here at the moment, but one little patch of wild white indigo, Baptisia alba, sends spires of white flowers skyward. All the bumble bees are here.
McElrath wades into the vegetation and catches a few more bees. He takes his buzzing collection over to his car and pulls out a cooler. He’s going to put the bees on ice. This slows them down, making identification easier.

Wild bees have been around for at least 100 million years, and in that time they have evolved a variety of lifestyles. Like honey bees, bumble bees are social creatures with a queen at the heart of their colonies, McElrath says.
“Bumble bees have a weird life cycle that is different than that of honey bees, which continue from year to year,” he says. For bumble bees, the entire colony dies out at the end of the season except for the queen bee, which overwinters and starts a new colony from scratch the following spring.

“And when spring arrives, she’ll emerge, start looking for spring ephemeral flowers to get enough energy to start a new colony,” he says.

This, and the fact that they don’t nest in the same location year after year, makes it difficult to locate where the bumble bees live. As a result, bee researchers know more about what bumble bees eat than about where they nest and how their colonies function.

McElrath pulls out a sufficiently groggy bee to look at it more closely. It’s another brown-belted bee. He knows it’s a female because her hind legs sport bulging stores of yellowy orange pollen. Male bumble bees don’t live long enough to care about pollen, McElrath says. They’re after only nectar and sex.

A second bee from the cooler is a female Bombus auricomus, the black-and-gold bumble bee. She’s bigger than average and might be a queen. McElrath has captured nine bees in the 15 or so minutes we’ve spent searching, most of which belong to these two species. A third one cannot be positively identified in the field. Later, it was confirmed as Bombus pensylvanicus, a less-common species despite being called the American bumble bee.

Scientists know so little about bumble bees that it’s hard to make recommendations about the kinds of habitat they need, McElrath says. Only 11 of the 18 species historically collected in Illinois have been seen in the last 15 years. Of those remaining here, three are endangered or threatened.

“So we may be protecting prairie because we know they forage here, but where are they actually nesting?” he says. “It’s likely many are nesting or overwintering in the forest, in cracks and crevices in trees or in old mammal nests. But we really don’t know that much about the vast majority of Bombus species. That’s why it’s essential we keep going out into the field.”

Disease, habitat loss, overuse of chemical controls on crops and a warming climate are all implicated in the decline of various species of bumble bees worldwide. Out here, seeing these surviving in a remnant of what once was an ecosystem that stretched as far as the eye could see, the storm on the horizon seems appropriate.