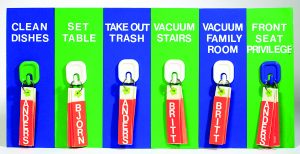 Whose turn is it to do dishes? You’ll always know with this easy homemade chore chart. (Photo by Donna Erickson)

Most chore charts — the ones where the days of the week run across the top and the chores are listed down one side — don’t take into account that family days are unpredictable! What if no one’s home for dinner because of a basketball game? Does one child get to skip her turn doing dishes? Or does she have to do it the next night, thereby throwing off the whole chart? See what I mean?

So here’s a new plan that really gets the jobs done — unless you have a gremlin in the house. (I’ll explain later.)

Discuss with your kids the basic chores that need to be done in your home. Five or six jobs is a good number for starters. You might want to add a category for the most-sought-after privilege. In our house each of the kids ALWAYS wants to sit in the front seat of the car.

For a sturdy chore board, here’s what you need:

— 1 piece of white foam board, cut in a rectangle that’s 18 inches wide by 9 inches long

— Several plain index cards, cut in 1-inch-by-5-inch strips with a hole punched at the top of each strip (one strip for each child for each chore and privilege).

Make it in three easy steps:

With a marker, print the chores across the top of the board. Draw vertical lines down the board to separate the categories. Under each chore, attach a hook.

Let your kids each print their name on their own six strips, then have them loop their strips on each ring and hang on each hook.

Explain that the person whose name appears on top of the ring is “up” for the task/privilege in the category. When she completes the job, she gets to flip her name over so that the next child’s name appears. Now it’s his turn!

As for the gremlins? Well, it can happen that a name is mysteriously missing from one loop (washing dishes) and is subsequently found twice in another (gets to choose any dessert). So suddenly someone’s saying, “Hey! When’s the last time Amelia had sink duty?”

Nothing’s perfect. Mostly, though, this chore chart works like a charm. Because not only is the method clear and fair, but the kids are involved in the process.

CREATIVE FAMILY FUN: Keep out mud with a cha-cha-cha doormat