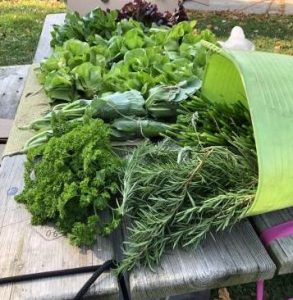 Hardy and half-hardy vegetables can be planted in Illinois in early April. Leafy greens such as kale and spinach can be planted early and again in late August for two harvests. (University of Illinois Extension photo by Nancy Kreith)

Across Illinois, experienced gardeners are blocking dates on their calendars based on expected thaw dates and anticipated harvest times.

Hardy vegetables can be planted as soon as the ground can be worked. That typically occurs between mid-March and early April. The Illinois State Water Survey has information about local spring and fall frost-free dates at www.isws.illinois.edu/statecli/Frost/frost.htm.

Serious gardeners should take this information to heart, says Nancy Kreith, a horticulture educator at University of Illinois Extension.

“Schedule your planting dates based on crop hardiness and days to maturity,” says Kreith, who works in Cook County. “Hardy vegetables can be planted in the spring, four to six weeks before the average frost-free date, which is when it’s 32 degrees or above.”

Since frost-free dates are averages and actual dates will vary each year, she recommends providing early plantings with some protection. One way is by planting one to two weeks later in the spring to avoid late season frost or, for a late harvest vegetable, plant one to two weeks early for protection against an early frost. Another option is to cover plants to protect against early or late season frosts.

A few popular hardy vegetables are Brussel sprouts, onion, and pea. Broccoli, cabbage, kale, leek and spinach can be also planted again in late August to early September for a successful fall harvest

In Illinois, half-hardy vegetables such as carrots, lettuce, beets, and cauliflower can typically be planted from late-March to early May. Most of these crops can be planted again in mid-July to early September. Potato and parsnip are the exception, and best planted in the spring.

“In addition to knowing when to plant these vegetables, it’s important to know how to select, plant and harvest them,” says Kreith. “Root crops, the broccoli family and leafy greens each require special consideration.”

Root crops require well-drained soil with plenty of organic matter. Directly sow seeds 1/4 to 1/2 inch deep. Prepare a shallow trench and spread a pinch of seed along the row. Once seedlings are 1 to 2 inches tall, thin them to the correct spacing, typically 1 to 4 inches apart, depending on the vegetable. Harvest by pulling the plants from the ground and trimming off the tops when necessary. Beet tops can be eaten along with thinned out sprouts.

Crops in the broccoli family should be planted by direct seeding or by using transplants. Transplants are preferred with many Brassica crops as they establish faster and mature earlier. Harvest these crops at the right time by following instructions on the seed packet or plant label. For broccoli, cabbage and cauliflower, harvest once the head forms. Timing is essential because vegetables can easily become over-mature; for example, when broccoli begins to flower. For kale and collards, continually harvesting the outer, mature leaves allows for continual harvest from summer to fall.

With leafy greens, it is more economical to direct seed. Lettuce and Swiss chard can be transplanted, but spinach, mustard and turnip are best direct seeded. Consider planting in two-to-three-week intervals, which is called succession planting, to yield a more useable harvest over a longer period.

Most leafy greens are fast maturing. Leaves should be harvested when young and tender and can be harvested as baby leaves. Typically, lettuce and mustard are ready to harvest from seed in just 30 to 40 days. Harvest by cutting the whole plant or harvest individual, outer leaves.

Going into spring gardening, here are a few reminders about good practices.

Learn more about cover crops at the Illinois Extension’s Grow Your Garden podcast, and about growing vegetables at: extension.illinois.edu/veggies.