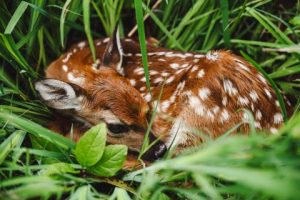 White-tailed deer fawns are left alone the first few weeks of their lives for their own safety because predators cannot smell them. The mother is nearby and will return in a few hours to nurse it.

Spring is the season of new beginnings, and with that comes close encounters with baby wildlife. A nest of bunnies in your backyard or a baby bird outside its nest can be surprising, but in most cases, baby animals do not need to be rescued.

Peggy Doty, an energy and environmental stewardship educator at University of Illinois Extension, says sometimes intervention can do more harm than good and overwhelm wildlife rehabilitation centers. A baby animal is best cared for by its parent.

“Nature is tough sometimes and we are in a situation where we want to help,” Doty says. “But you do not want to kidnap baby animals from their parents so think through any rescue ideas fully.”

The first thing to consider is your own safety. Even a juvenile bird of prey has tools to protect itself and wild animals have no idea you want to help. If an animal is directly in harm’s way, try to coax it away to a safe place.

Next, observe the animal for a while to determine if it is injured or abandoned. It may be waiting for a parent to arrive with food or experimenting with being on its own.

“Young owls practice leaving the nest by ‘branching,’ ” Doty says. “This means they flop around in trees and often drop to the ground. They cannot fly back, but they will use their feet and beaks to pull themselves up. Young owls are best left alone.”

If an animal is clearly wounded, call a wildlife rehabilitator for advice on how best to capture and transport the animal. The Illinois Department of Natural Resources maintains a list of rehab centers available online at IDNR/LawEnforcement/Documents/IllinoisWildlifeRehabilitation.

Bunnies are one of the most common animals found in urban areas. Eastern cottontail rabbits are prolific and start breeding early in the year, with multiple litters throughout the summer.

Rabbits stay in the nest only a short time. A bunny with its eyes open is fully capable to be on its own. If you have a nest in your yard, walk any pets on a leash until the rabbits have moved on.

Birds will not abandon their young if touched, but it’s best to not move animals unless they are in harm’s way. A baby bird that is somewhat feathered and on the ground is a fledgling waiting for a parent. A baby bird with little to no feathers will have its best chance at survival if it is safely returned to the nest. To prevent hypothermia, keep it in a covered, warm location while preparing to put it back.

“The animal most often identified as needing a rescue in Illinois are white-tailed deer fawns,” Doty says. “They are found alone in backyards and curled up in garden beds and people assume they are abandoned but being alone is how they survive.”

Fawn scent glands do not function the first few weeks after they are born, so predators cannot smell them. If you see a fawn curled up and resting, move away as quickly as possible, and do not check on it. The mother is in the area and will nurse the fawn as needed.

For more information, visit the Living with Wildlife in Illinois.