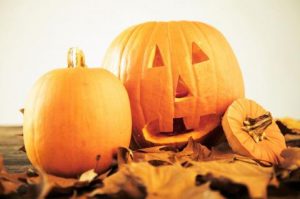 Although jack-o’-lantern pumpkins are edible, other squash varieties have a better texture for making pies, soups and breads. (Photo courtesy of University of Illinois Extension)

When you think of Halloween, you may think trick-or-treating and fall, but you likely also think pumpkins.

“In 2018, Illinois pumpkin farmers produced an estimated 500 million pounds of pumpkins,” he says. “The town of Morton claims to be the Pumpkin Capital of the World, with 82 percent of the world’s canned pumpkin processed there.”

Although jack-o’-lantern pumpkins are edible, other squash varieties have better texture for making pies, soups, and breads. The world’s largest pumpkin pie was made at the New Bremen, Ohio, Pumpkin Fest in 2010. The pie was 20 feet in diameter and weighed 3,699 pounds.

Pumpkins are grown on every continent except Antarctica. The largest pumpkin on record was grown in 2016 and weighed 2,624 pounds.

Tips for selecting the perfect pumpkin for carving

Before carving or display, wash the pumpkin with warm water and let it dry. The pumpkin will last longer in a cool place. After carving, coat the inside of the pumpkin and the cuts with petroleum jelly. A pumpkin cut for Halloween will last seven to 10 days depending on weather conditions.

Avoid using candles to light a pumpkin because the heat will cook the flesh, shortening its lifespan.

For more information about pumpkins, check out the Illinois Extension website Pumpkins and More at web.extension.illinois.edu/pumpkins.