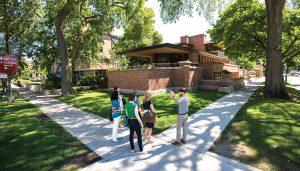 When considering the most notable architecture in Illinois, the focus quickly turns to Frank Lloyd Wright.

The legendary architect, who lived from 1867-1959, designed more than 500 structures — including notable homes, businesses and even an unrealized mile-high skyscraper in Chicago — through a 70-year career.

It’s not just Wright, but acolytes and other influential architects like Daniel Burnham, Ludwig Mies van der Rohe, Louis Sullivan and Helmut Jahn who are all well represented in Illinois.

A suggested six-day tour from the shores of Lake Michigan to Springfield offers a sample of famous and lesser-known sites based on information from the Illinois Department of Tourism and architectural enthusiasts.

Many attractions have reopened after COVID-19 shutdowns with limited-to full capacities or different operating hours. Visitors should inquire ahead of time for up-to-date travel policies and health and safety information as well as admission costs.

Chicago is known for its impressive skyline and storied architectural past. To kick off an itiner-ary, start at the Chicago Cultural Center, 78 E. Washington St., to view a pair of magnificent stained glass domes. Then stroll north to the Chicago Architecture Center, 111 E. Wacker Drive to orient yourself to the city’s splendor. From there, get booked on an architectural boat cruise along the Chicago River.

Afterwards, stroll north on Michigan Avenue for an abundance of impressive structures includ-ing the Wrigley Building, Tribune Tower and 875 N. Michigan Ave. (the former John Hancock Center). Its 360 Chicago + Tilt is sure to leave you speechless as you look out (and down if you’re brave) over the city. A short detour east brings a visitor to Mies van der Rohe’s noted mid-century apartment towers at 860-880 N. Lake Shore Drive.

Enjoy some time in the sun as you check off Millennium Park, 201 E. Randolph St., and

Cloud Gate (aka The Bean) before admiring the vast Jay Pritzker Pavilion, an outdoor concert venue designed by architect Frank Gehry. Then, walk The Nichols Bridgeway to the third floor of the West Pavilion of the Modern Wing of the Art Institute of Chicago, 111 S. Michigan Ave. Head west to the James R. Thompson State of Illinois Center, 100 W. Randolph St., the Jahn-design steel and glass government structure. Catch it while it stands as there are proposals to sell and possibly tear down the controversial building.

Day 3: Chicago and the North Shore 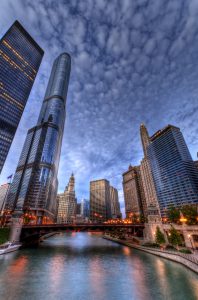 An architectural boat tour along the Chicago River offers a unique perspective of some of the city’s most notable buildings. (Illinois Office of Tourism photo)

Start the morning with breakfast in the West Loop at the famed Lou Mitchell’s restaurant, 565 W. Jackson St., located near the terminus of the onetime U.S. Route 66. Nearby is The Rookery, 209 S. LaSalle, a landmark building constructed in 1885 that’s Chicago’s oldest high rise. Double back to Willis (formerly Sears) Tower on Wacker Drive and head up to the see glass enclosed observation deck and a view makes you feel like you’re floating in air.

Next, head to Chicago’s North Shore where you’ll find the Baháʼí House of Worship in Wil-mette, the oldest surviving Baháʼí facility. While in the area, check out the symbolic design of the Illinois Holocaust Museum, 9603 Woods Drive, Skokie.

Oak Park, just 30 minutes from downtown Chicago, features both the Wright Home and Studio, 951 Chicago Ave., and Unity Temple, 875 Lake St., another UNESCO World Heritage Site. His home and studio have been restored to their 1909 appearance, the last year Wright lived there with his family. For a change of pace, take a side trip to the Ernest Hemingway Home and Museum, 339 N. Oak Park Ave. Continue the journey to Bartlett where you’ll find the Baps Shri Swamina-rayan Mandir, 4N739 Illinois Route 59, a traditional Hindu place of worship. Finish the day with an overnight stay in Rockford.

Fuel up for a lengthy driving day with the famous Swedish pancakes at the Stockholm Inn, 2420 Charles St., Rockford, then head over to the Wright-designed Kenneth and Phyllis Laurent House, 4646 Spring Brook Road. Take time for lunch and a tour at the Anderson Japanese Gardens, 318 Spring Creek Road. In Plano you’ll find Farnsworth House, 14520 River Road, designed and built by Mies van der Rohe from 1949-51, one of the most widely studied structures built in the 20th century. Continue to Geneva to the Fabyan Villa Museum, 1925 S. Batavia Ave., which was remodeled by Wright in 1907. Continue on to Kankakee and view the Finding Frank mural series in downtown Kankakee.

Get an early start and hit the road to Springfield, Illinois’ State Capitol and heart of the Land of Lincoln. Explore and compare the Illinois State Capitol, 401 S. 2nd St., and Old State Capitol, 1 Old State Capitol Plaza. Fans of the 16th president will enjoy the Abraham Lincoln Presidential Library and Museum, 212 N. 6th St. Then visit the Lincoln Home National Historical Site, 413 S. 8th St., a restoration of the neighborhood where Lincoln lived for 17 years. Finally, pay a visit to the Dana Thomas House, 301 E. Lawrence St., Frank Lloyd Wright’s largest and most elaborate Prairie-style designs with 35 rooms. While en route to Springfield, take a swing off Interstate 55 through Dwight and view a modest Wright-designed bank building near the downtown train station.