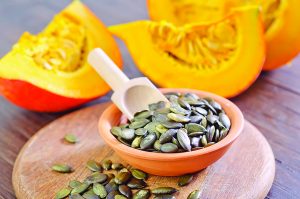 Toasted pumpkin seeds add a nutritious crunch when used as a topping for sauteed vegetables or salads. (Depositphotos)

Pumpkins are one of the highpoints of the fall harvest. The fruit originated in Central America. Pumpkins — like cantaloupes, cucumbers and squash — belong to the Cucurbitaceae, or gourd family. Most of the pumpkins that are grown in the United States come from Illinois and become available in October.

Whole pumpkins and the carved pumpkin shell are often used as decorative items. The interior pulp is a nutritious addition to savory and sweet dishes, but don’t throw out the seeds! Pumpkin seeds make a tasty snack that’s low in calories, high in protein and rich in fiber, as well as vitamins B, E and K, and zinc, iron and magnesium. Pumpkin seeds also contain many beneficial fatty acids and amino acids.

The flat, dark-green pumpkin seeds, or pepitas as they are often called, are covered with a yellow-white husk. Pepitas are a key ingredient in Mexican recipes and are often used in the cuisines of many other cultures.

Toasted pumpkin seeds add a nutritious crunch when used as a topping for sauteed vegetables or salads. Grinding pumpkin seeds with garlic, parsley or cilantro and adding olive oil and lemon juice to the mixture makes a wonderful salad dressing. Pumpkin seeds are also a delicious addition to oatmeal-raisin cookies or granola recipes.

Pumpkins seeds are a power-packed addition to sauces, soups and salads, and they’re a healthy snack. Roasting and adding spices enhances their flavor. This recipe provides a few suggestions for preparing pumpkin seeds.

1 pumpkin (field or sugar), about 2 cups

2 tablespoons salt, plus more for sprinkling