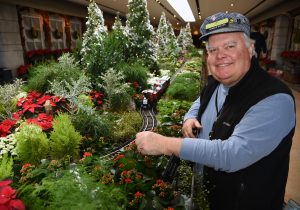 Now here’s a New Year’s resolution to keep your family on track right after the holidays. How about an early January visit to the Wonderland Express, a Chicago Botanic Garden train exhibit at 1000 Lake Cook Road in Glencoe?

The winter attraction has become a holiday tradition for many families and runs through Jan. 7. 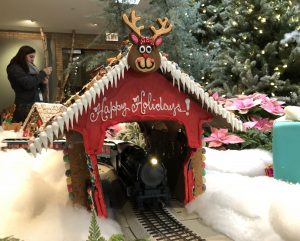 Expect to see an array of plants plus traditional miniature trains. There are blue and red engines with themes meant for the youngest of train fans.

“My grandson loves Thomas the Tank Engine the best,” said Lindy Lynk of Glenview, who visited the garden with her grandson on the morning of Dec. 14.

Of the display, “I think it’s absolutely beautiful.”

Betsy Brittsan of Glenview was also there that morning with her grandson Finn Barasa, 4, of Morton Grove. Finn tried to catch the snow that fell over the Thomas the Tank Engine area.

“He could literally stay here all day,” Brittsan said, of Finn. 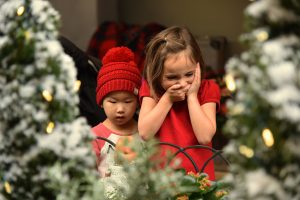 With the assistance of a train staff expert, Finn got to go behind the scenes to see how Thomas the Tank Engine is controlled.

“He’ll never forget this,” Brittsan said, of Finn. “He will talk about this for a long time.”

Brittsan takes care of Finn during the week and “We try to enjoy as many things as we can together,” said the youngster’s grandmother. 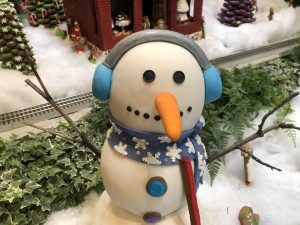 Natural materials are used to make the buildings (many illuminated) and the falling snow is part of the magic.

Every now and then, volunteers and staff must sweep the tracks that Thomas the Tank Engine rides on to clear it of snow to keep wheels smooth. 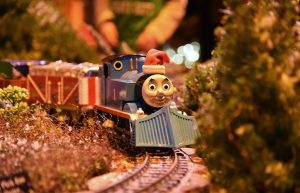 Charles Walker of Chicago is a garden volunteer. In Nichols Hall, he described the Chicago landmarks.

“This exhibit gets more amazing every year when I see it,” Walker said.

“How often do you see snow falling inside a building?” Walker said.

Walker said it’s a privilege to share his longtime love of trains with the generations.

“The most exciting part of the railroad is the look on the kids’ faces when they see the trains for the first time,” Walker said. 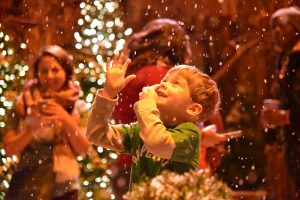 Wonderland Express is a paid entry attraction. A local North Shore bakery helped with part of the exhibit where baked treats and gingerbread confections are part of that train display section.

“It is fun here being an engineer at the garden,” Walker said.

“Come on out to the Wonderland Express.”

— All aboard for the Chicago Botanic Garden’s Wonderland Express . —-