Pokémon GO Fest 2019 in Chicago at Grant Park started off June 13 with cloudy skies and cooler temperatures. But by 1 p.m., thousands of people shed their Thursday jackets and rain ponchos so they could be more nimble in their quest to catch them all.

Catch Pokémon, that is. The catch them all is the catch phrase.

“We love Chicago, we love being here,” said Mike Quigley, chief marketing officer of Niantic, the developer and publisher of Pokémon GO.

“We sold out pretty quickly.”

Last year’s Pokémon GO Fest was in Lincoln Park. The first year in Chicago, three years ago, was in Grant Park and had fencing around the event perimeters. 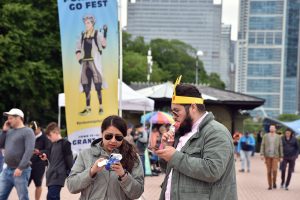 Lincoln Park was free range, basically, with an open design. And there was rain last year.

This year’s layout at Grant Park included no gates and featured habitats like spooky wood settings to explore, with ticket holders called trainers, who were lucky enough to get tickets, hoping for shiny rare Pokémon.

“We like to shake things up,” Quigley said, of the addition of special scenes and attractions.

Fog machines and decorative accents enhanced the habitats. Trainers could relax in their team lounges of red, blue or yellow. Many simply hung out by Buckingham Fountain to see the famous water spout. 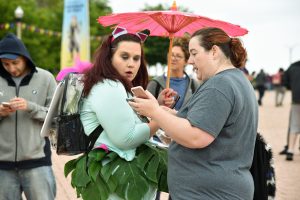 Thousands of people walked the more than 100 acres of the site. While there were hugs and backslaps by pals who found each other, many folks walked the park with their heads down, fixated on their cellphone screens.

Pretty common scene and acceptable, not rude at all and expected, for people to stare at screens for conversation starters, especially when the weather started looking up.

Afternoon sunshine. Put away that umbrella.

“We’ve got a lot of really passionate trainers,” Quigley said.

Among trainers was Crystal Motes of Atlanta, Georgia who was thrilled to catch a rare Pokémon.

“I have caught a shiny Lapras,” she said, giggling, of her Pokémon catch. 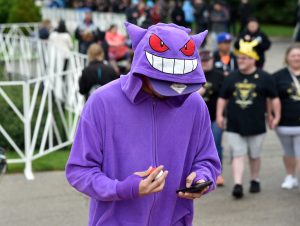 Besides looking for Pokémon and replenishing bag items such as Pokéballs at Pokéstops, trainers also had fun taking selfies with famous YouTubers.

Some people around the world have made a living tracking Pokémon and sharing the love of the game on the Internet.

They’ve built up a fan base and fans in Chicago were heard squealing in delight when they saw their renowned favorite YouTuber walking by, that expert grabbing pro camera footage for the latest YouTube video.

Meet REVERSAL, a YouTuber from Europe who uploaded updates from Chicago while seeking rare Pokémon to spawn or appear. 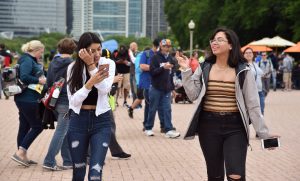 “First and foremost, this is the craziest Pokémon GO Fest that we’ve ever had, because the spawns are insane and there is just so much happening right now,” REVERSAL said.

“And obviously, I’m not just here for Pokémon, but mostly just to meet everybody who’s watching the channel,” he said, referring to the REVERSAL YouTube channel.