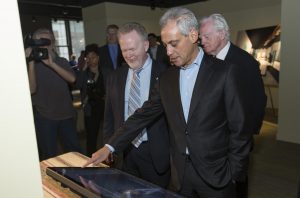 America’s first museum dedicated to U.S. writers and their craft will open In Chicago in May, but the museum held a sneak peek Feb. 21. The American Writers Museum will be a “destination, culturally for Chicago and the world,” said Chicago Mayor Rahm Emanuel. “The writers’ museum is another great accomplishment for the City of Chicago to add to its mosaic.”

Interactive exhibits honoring American writers from Dr. Suess to Mark Twain to James Baldwin will be on display. One criterion for admission into the permanent author hall-of-fame — writers must be dead.

“I look forward to arguing with you about who should be included,” said AWM President Carey Cranston. Living writers are welcome too, Cranston said. The museum will host events, book signings and readings, partnering with Chicago-based Poetry Foundation and other literary organizations.

Seven years in the making, the American Writers Museum is the brainchild of Maryland-based Irishman Malcolm O’Hagan, who saw a gap in the national museum landscape for a showcase of the written word. O’Hagan formerly served as president of the National Electrical Manufacturer’s Association in the Washington D.C. area. Chicago was chosen as a central location, and a town with many other great museums, O’Hagan said. 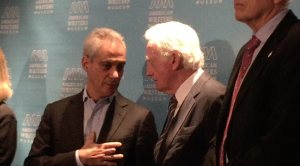 The museum, located on the 2nd floor at 180 N. Michigan Ave., will celebrate “authors who are emblematic of a unique American Voice, across history, genre and mediums, for poets to sportswriters,” according to a press release.

A national curating committee has worked with Boston-based Amaze DESIGN to develop five permanent galleries and two changing exhibitions. AWM is partnering with almost 60 author home museums across the country to feature changing exhibits based on writers’ personal habitats.

O’Hagan was inspired by the Dublin Writer’s Museum in Ireland.

“But that one has artifacts-based exhibits like first editions and manuscripts. This museum will be interactive and digital,” he said.

One notable artifact will be on display on opening day, May 16: Beat-poet Jack Kerouac’s “scroll” manuscript of his novel “On The Road.” The author, seeking to compose in complete spontaneity in 1951, assembled a 120-foot roll of drawing paper he rolled into his typewriter, and typed without page-breaks. The scroll, owned by Kerouac’s family, was on display at the New York Public Library for many years and now travels the world. 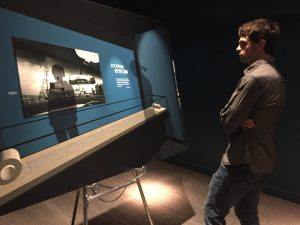 Author Matthew Schreiner examines a rendering of Jack Kerouac’s “scroll” manuscript of his novel “On The Road,” which will be on display at the museum. (Chronicle Media)

The “Mind of a Writer” gallery will “de-mystify famed writers; works and methodologies and invite visitor creativity,” according to museum materials. Chicago authors will be represented such as Nelson Algren, Saul Bellow, Carl Sandburg, Gwendolyn Brooks and even L. Frank Baum, who wrote “The Wizard of Oz” in Chicago, published in 1900.

A touch-table will allow multiple users to pull up images of original manuscripts from 20 masterworks of American literature, such as Sylvia Plath’s handwritten poetry pages or a typewritten draft of Robert Lowell’s “Epilogue.”

The AWM has raised $8.5 million and is on a final fundraising push to raise a total of $10 million. Donor and board member Leigh Pierson Conant, of the Cookie Jar Foundation, praised AWM.

“Another win for this city and its broad shoulders,” she said. She called the museum the “first and only museum of its kind, dedicated to honoring and promoting American authors. Writing is the bedrock of our culture,” she added. “The museum could have been anywhere, but the chosen site is here in Chicago, on Michigan Avenue’s Cultural Mile.”

The museum staff predicts it will draw 120,000 visitors annually. Admission will be $12 for adults, $8 for students and free for children under age 12.

“Honoring writers is the way to help people understand the profound impact of writers on our history and culture,” O’Hagan said.

For more information, see the museum’s website at www.americanwritersmuseum.org.

— American Writers Museum to open in Chicago in May —