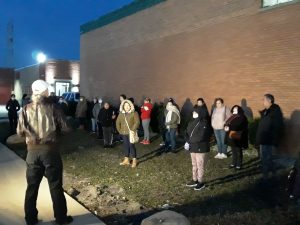 Jonathan Millan was the last of six adults in his family to be working in the wake of the coronavirus pandemic.

However, that didn’t stop the factory worker from walking off the job of a Bedford Park food company early April 6 amid safety concerns he and other employees felt. An estimated 120 factory workers are affected by the walkout, which began April 6 at Raymundo’s Food Group.

“These two weeks are going to be hard,” Millan said. “We are not going to have any money coming in.”

“My husband works here too. We are going to have zero income being generated,” Mota said.

Workers said concerns that a worker at the facility has already tested positive for COVID-19, that the company has continued to remain open without doing a sanitizing and deep cleaning of the building, and that they continue to be in close proximity to each other helped them make the decision to leave their jobs.

A company official said Raymundo’s has done a deep cleaning of the factory and that they are following workplace safety guidelines.

Jim Taylor, CFO and COO of Raymundo’s Food Group, said Friday that several employees remain on temporary leave “but in the meantime we have brought in temporary employees to meet our production demand and serve our customers.” 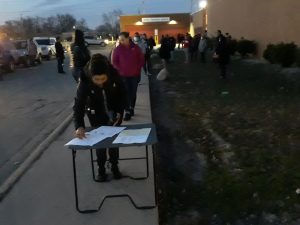 “With all that said, we do look forward to our employees’ return,” Taylor said.

He said the company has been putting steps in place for weeks since the COVID-19 virus first hit the area.

The employees said they did not know the first employee of the factory tested positive for COVID-19 for nearly two weeks after the worker left the facility.

The Raymundo’s workers were not the only ones to walk off the job April 6. Workers at MAT Holdings in Romeoville also left their positions over coronavirus concerns.

Workers at both facilities are calling for a professional cleaning of their building and 14 paid days off to protect themselves and their families, claiming their employers failed to protect their health.

Marcelina Mota said she was working with five other women on a line, with workers on each side of her no farther than a foot away.

“We were very close,” said the mother of three.

Millan said workers’ biggest concern is for the kids they have at home.

“We have to protect our children. Our kids are in danger. We have parents, they are all in danger,” the Chicago resident said. “In these two weeks, we want a commitment from the company that the factory will be cleaned, and we want to make sure that no one else has the virus.”

Jorge Mujica, a strategic campaign organizer for Arise Chicago, an organization fighting workplace injustice through education, and organizing and advocating for public policy, said the agency has received grant money that it would use to help compensate workers should the company not commit to paying workers during their two-week self-quarantine.

Raymundo’s Food Group operates around the clock with three shifts. 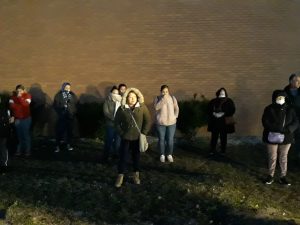 Raymundo’s workers listen to advice from Arise Chicago’s Jorge Mujica as they stand outside the factory. (Photo by Kevin Beese/Chronicle Media)

Mujica questioned if the Bedford Park factory really classifies as “essential” as it creates gelatin. Mujica said he raised a similar “essential” question with Jel Sert in West Chicago.

“They have 10 production lines — one doing Pedialyte and nine doing candy,” Mujica said of Jel Sert. “Pedialyte absolutely, but what is essential about candy? Companies are supposed to be scaling back.”

Nearly half of Raymundo’s factory workers stood in line early April 6 outside the Bedford Park business to sign a demand letter for paid compensation and a deep cleaning of the facility. The workers then went home, showing more social and health responsibility than their employer, Mujica said.

He said several workers use and touch the same pieces of equipment in the factory and work close to each other. The punch-in machine they must touch is not disinfected, he said.

Mujica said an additional potential coronavirus case reported at Raymundo’s was a worker in the same position as the first infected worker.

“This is not only about cleaning anymore,” said one worker, who did not want to be identified. “We may have already been infected and may have taken the virus home. We will quarantine ourselves and isolate ourselves from our own families at home because of the lack of responsibility from this company.”

“Raymundo’s continues to place employee safety as its number one priority now, during the COVID-19 pandemic, and always,” Taylor said. “Raymundo’s managers have continued to tell all employees during pre-shift meetings that they may stay at home if they do not feel well or do not feel safe during this time.”

“Raymundo’s follows Good Manufacturing Practices for production of refrigerated desserts, which require the highest levels of sanitation at all times,” Taylor said.

He said the Bedford Park company has instituted the guidance provided by the U.S. Centers for Disease Control, and Occupational Safety and Health Administration in order to make the workplace as safe as possible during the pandemic.

Taylor said that Raymundo’s took the extra precaution to shut down production over the weekend of April 4-5 for a deep clean by an outside professional cleaning contractor, Open Works.

Company officials said that masks are now available at the facility for employees and that workers can take up to five masks home for their families.

The company was scheduled to begin daily temperature screenings of all employees on March 13.