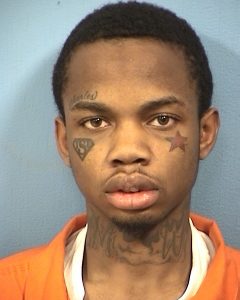 A Bellwood man has been sentenced to 22 years in prison for his role in the 2014 murder of a Bensenville tobacco store owner.

Kenneth Bardlett, 24, had pled guilty to a lesser charge in exchange for his testimony against other suspects in the murder. However, when it was determined that Bardlett lied on the witness stand, DuPage County prosecutors pulled that deal and reinstated first-degree murder charges against him.

In March 2014, Bardlett had entered a guilty plea to aggravated battery with a firearm in connection with the crime. As part of a plea agreement, Bardlett agreed to testify against any and all co-defendants involved in the case.

In exchange, the state agreed to a sentencing recommendation of 20 years, 85 percent of which needed to be served.

During the trial of one of his co-defendants however, Bardlett lied while on the witness stand. Consequently, the state filed a motion to withdraw the plea agreement, which was granted.

Additionally the court found Bardlett in contempt of court for “engaging in unruly verbal and physical behavior” and for “providing false testimony” and sentenced Bardlett to six months in the DuPage County Jail, with credit for time served.

Two other men, Tremayne Davis, 27, and Stephan Russell, 25, both from Chicago, were also charged in the murder of Bensenville tobacco store owner Hussein Saghir.

In December 2016, Davis entered a guilty plea to attempted armed robbery with a firearm and sentenced to eight years in prison.

Following a three-day trial in November, a jury found Russell guilty of two counts of first-degree murder and one count of attempted armed robbery. Russell was scheduled to appear June 18 for sentencing in front of Judge Daniel Guerin.

At 5:45 p.m. Jan. 19, 2014, Bardlett, Davis and Russell went to Sam’s Tobacco and Food Mart on Irving Park Road in Bensenville. While Davis remained in the vehicle, Bardlett and Russell encountered Saghir and his brother outside the store as the men were preparing to close up shop for the evening. Following a brief altercation between the men, Saghir was shot and killed.

After the murder, Bardlett, Davis and Russell fled the scene. An investigation led by the Bensenville Police Department, the Major Crimes Task Force and the DuPage County State’s Attorney’s Office led authorities to the three suspects.

“Regardless of what Mr. Bardlett has said or done in the past in relation to this case, the fact remains that Mr. Saghir is no longer here, able to share in the lives of his loved ones,” DuPage State’s Attorney Robert Berlin said. “For his role in the murder, Mr. Bardlett will now spend the next 22 years of his life behind bars. Our judicial system is a truth-seeking process and for this system to work properly it must be safeguarded from misstatements.

“Mr. Bardlett had a deal — to tell the truth when called upon. He chose to ignore that deal in an effort to infect the judicial system and in so doing so added years to his prison sentence.”

He said Bardlett, Davis and Russell need to be held responsible for the “senseless murder of Hussein Saghir.”

Bardlett will be required to serve 100 percent of his new sentence. He will receive credit for time served in jail awaiting trial.