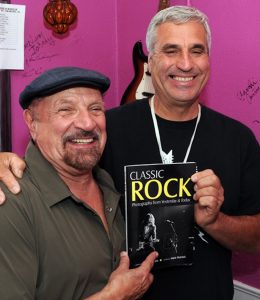 Growing up in Oak Park in the ’60s, Jim Summaria had a talent for photography and a passion for rock music.

But he couldn’t have known that his talent and passion would combine to lead him to be, so to speak, “in the room where it happened,” shooting many of rock music’s best bands for much of the ’70s.

Half a century later, Summaria, now retired in the far northwest suburbs, is sharing a look back at those electric days with a photo book. His “Classic Rock: Photographs from Yesterday and Today,” featuring his photos and text from professional writer and rock historian Mark Plotnick.

In the early ’70s, Summaria was just another young man seeking his own path in life. A kid from a family of electricians, union guys who made good, reliable incomes, he felt pressured to choose that career. But he knew almost immediately it wasn’t right for him.

“First thing I did was dig a ditch. In February,” he recalled. “Nothing bad about being an electrician, but it wasn’t me.”

In 1972, Summaria had his first taste of photographic satisfaction, a packet of pics shot from the 10th row of a Rolling Stones concert with a cheap Instamatic camera. They weren’t great, but they were pretty good.

“I got Jagger strutting across the stage, Mick Taylor, Keith Richards,” he said. “I still have the photos.” He started going to shows all around Chicago, including the Kinetic Playground, where he’d maneuver himself to the front of the stage and click away on a little Instamatic.

When a counter guy at Lions Photo in Schaumburg praised his work and suggested “Why don’t you get a 35mm camera?” Summaria replied, “What’s a 35mm camera?”

He went to Sears and purchased a 35mm camera with a telephoto lense, which enabled him to take quality shots, even from the balcony.

“My pictures kept getting better,” he said. When a friend learned of available seats for a Led Zeppelin concert in St. Louis, they drove down and bought obstructed view tickets. But they didn’t stay in the balcony, instead sneaking down to the main floor (as was possible back in the ’70s) where Summaria acted like he belonged, nudged up against the stage and started snapping shots.

“And I got these great pics of Led Zeppelin,” he recalled with relish. 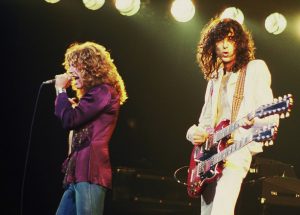 When he showed them to manager Rich Carlson at Flipside Records, Carlson deemed them “fantastic” and invited Summaria to bring him more to post on the wall behind the registers. When Larry and Carl Rosenbaum, Flipside’s owners, who also operated Celebration — Flip Side concert productions, saw Summaria’s work, they offered him the opportunity of his young life.

And so, in September 1973, armed with a coveted all access backstage pass, he walked into the Auditorium Theater to photograph Wishbone Ash.

Summaria also started taking evening classes at Triton College in River Grove. It was there instructor Marv Chait saw real promise in his work. “He took me under his wing,” Summaria said. “Told me I was good enough to be a professional.”

It was an iffy proposition. Not only was photography work less certain, it paid far less than electrician work. “In 1979 I made $32,000 as an electrician,” Summaria said. “My first year as a photographer (in 1980), I made $10,000.” But whatever photography lacked income-wise, it made up for in the thrill and satisfaction.

“I always felt if you had a job you had a passion for, you’d never work a day in your life,” he said.

Summaria seldom got the chance to talk with the big stars, but then of course, every major band was once an opening act. He recalled chatting backstage with the lead singer of the opening band at a New York Dolls/Mott The Hoople concert in October 1973. 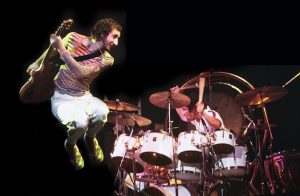 For all the excitement of photographing the famous, Summaria was always aware he had a job to do. “Basically what I like to communicate to the viewer with a still photo (is the) experience, the actions, the excitement of what a rock concert is,” he said.

Summaria’s innate talent was bolstered by his growing mastery of technique.

“When I edit (photos) it’s gotta have all the elements, of composition, the decisive moment and the lighting,” Summaria said.

“The Who were the most exciting band to photograph,” Summaria said. And difficult. “You’re framing the picture at the same time you’re trying to get the decisive moment.”

Mike Gorman is a co-founder of the influential pop rockers Pez Band, played in a revamped Off Broadway and currently is bassist for The Outfit. He praised the way Summaria and Plotkin’s book captures the spirit of early rock.

“All these great performers,” he said. “It’s beautiful, and the text is fun. Little tidbits without going too far.”

Gorman particularly likes one of Summaria’s favorite photos, of guitarist Pete Townsend, airborne with his legs tucked under him as he slashes at his guitar, with Keith Moon wailing away on drums behind him, saying, “I think it’s great. You can see the energy in the photo.”

By 1980, Summaria stepped away from shooting live shows after he was hired to head Allstate Insurance’s photo department. While different, the job had its own satisfactions. He recalls meeting and photographing an array of interesting and famous people, including the Obamas and George H.W. Bush, Meryl Streep, Bo Derrick, Michael Jordan and Mickey Mantle.

Summaria also remembers the “everyday people” he’s captured on film, one in particular — the poignant scene of a heroin addict in San Antonio, Texas, struggling to kick her habit, not through rehab, but with prayer, writhing in pain, surround by candles and other women praying over her.”

It’s all been meaningful to Summaria.

“I’ve been to the White House and everywhere in between. I’ve done it all,” he said.

After retiring from Allstate, Summaria went back to his first passion, photographing some of the same acts he started out shooting, including Savoy Brown’s Kim Simmonds, Robert Plant, the Who, and others. Fifty years later, it’s still first and foremost a labor of love.

“This has never been a job. It’s always been a joy.”