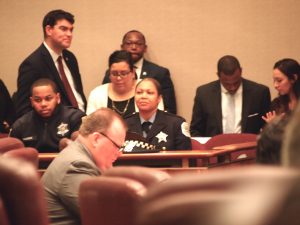 Police officer Jennifer Maddox listens as Chicago aldermen talk about her accomplishments working with youth at the Parkway Garden Homes on the city’s South Side. (Kevin Beese/Chronicle Media)

A Chicago police officer who works to empower children on the city’s South Side needs your help.

Jennifer Maddox, who, in addition to working her beat, runs an after-school program for disadvantaged youth in the Parkway Garden Homes, has been chosen as a Top 10 CNN Hero for 2017.

Supporters of Maddox can vote every day at CNN Heroes.com by logging in via email or Facebook, as well as Facebook Messenger by messaging “VOTE” to the CNN Heroes Facebook page. Individuals can vote up to 10 times a day per method (for a total of 30 votes) until 10 p.m. Dec. 12.

A member of the Chicago Police Department for more than 20 years, Maddox launched Future Ties in 2011 in an effort to give South Side children a sense of belonging and peace.

Maddox, who also works as a security guard at Parkway Garden, located at 65th Street and Martin Luther King Drive in Chicago’s Grand Crossing neighborhood, said she saw that youth in the complex often got into trouble because they were bored.

That boredom, she said, has often led to violence.

“A lot of our young people are fearful to even come outside,” Maddox said in a CNN interview. “The shooting, the killing. Five-, 6-, 7-year-olds are losing people that they love and care about … We are in a state of emergency here in the city of Chicago. I’m a law enforcement officer, but I am also a mother and member of this community. I don’t think any child should grow up and think, ‘This could be it.’”

Starting out with 40 youth in the program six years ago, Future Ties has now grown to serve more than 100 youth. Maddox hopes to eventually expand the program so that all 1,200 children living in Parkway Garden are involved.

Maddox, who grew up on the city’s South Side, runs Future Ties with nine other individuals. Their efforts will be featured on “CNN Heroes: An All-Star Tribute,” airing live at 7 p.m. Dec. 17.

“As a police officer, she recognized the need for better alternatives to the root causes of delinquency and gang membership and violence,” said Ald. Edward Burke (14th Ward). “Her dream of building safe and sustainable communities for young people is really the foundation of Future Ties, a beacon of hope and an example for other neighborhoods of what can indeed be accomplished by working together.”

Ald. Ariel Reboyras (30th) said that Maddox is the perfect example of a police officer working with a community to improve things. He said because of Maddox youth in the Parkway Garden complex have opportunities that they might not have ever had otherwise.

Ald. Derrick Curtis (18th) labeled Maddox “a Superhero, like a Wonder Woman” for what she does with youth.

“Not only are you a hero to our city as you serve and protect, but you’ve been a mother, a sister and a friend to a lot of kids who really needed your help,” Curtis told Maddox as she was recognized for her efforts at last week’s City Council meeting.

Curtis said after his mother died when he was 11, he thought he was in the “in crowd’ doing what he wanted. It took a police officer from the West Side, he said, “to hit me upside my head and grab me under his wing. If he hadn’t done that, I probably wouldn’t be the person I am today.”

Ald. Willie Cochran (20th), a former police officer, noted that he worked with Maddox in the Third Police District and that her community-policing efforts are a needed part of any equation to make neighborhoods work. The alderman said Maddox accomplishes amazing things without the adequate resources or space that such a program should have.

Ald. Anthony Napolitano (41st), another former Chicago police officer, thanked Maddox for all she does.

Read the current digital edition of the Cook County Chronicle