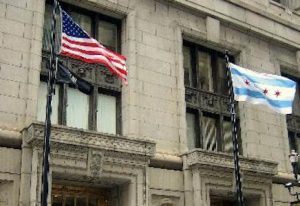 The city of Chicago will pay out more than $8 million, including $4.4 million against police officers, in settlements from four lawsuits.

Aldermen approved the settlements at the July 26 City Council meeting.

The largest of the settlements was a $4 million payout to Jane Kintanar, the wife of Carlo Kintanar, who was killed in 2010 while riding his motorcycle and hit a hole in the 2600 block of South Damen Avenue.

Ald. Ed Burke (14th Ward), chairman of the City Council’s Finance Committee, said that the initial demand of the lawsuit was $17 million.

Jane Kintanar sued the city alleging that her husband’s accident resulted from a deteriorated roadway, improper placement of traffic signs and a failure to warn drivers of rough terrain.

The largest of the police settlements was a $2.9 million payment to the families of Willie Owens, 66, and Margaret Silas, 88, who died from injuries sustained in an accident caused by police pursuit of a suspect.

Chicago police Officers Erik Ruhnke and Mari Medina, and Paul Forbes, the suspect being pursued, were named as defendants in the case.

Sharday Johnson, Owens’ daughter, said that police should have stopped pursuit of Forbes before the deadly August 2015 crash occurred on the 7500 block of South St. Lawrence Avenue.

Forbes has been charged with murder, aggravated fleeing, and two counts of aggravated battery causing great bodily harm in connection with his alleged involvement in the fatal crash. Police pulled over the Pontiac Bonneville that Forbes was driving for an alleged traffic violation.

When Ruhnke and Medina got out of their squad, the Pontiac took off westbound on 75th Street, blowing through the red light at King Drive and hitting a Subaru that contained Margaret Silas.

Assistant State’s Attorney Kim Przekota said that Forbes was traveling at 80-90 mph when the accident occurred. Police said that Forbes then hit Owens, who was standing in the roadway tending to the front bumper of his truck, which had become disabled.

Silas was paralyzed in the incident and died from injuries sustained in the accident five days later.

The lawsuit contended that the officers pursuing Forbes should have terminated the pursuit when it led them into a densely populated area, where the lives of others were at risk.

Burke said the initial demand in the lawsuit was for $11.2 million.

Another police settlement was for $500,000 to Mearary Lopez, administrator of the estate of Johnny Lopez, who died while in police custody.

Lopez was found unresponsive June 2, 2015, in his cell in the Jefferson Park station 6½ hours after being booked for battery.

His family contends that another detained suspect called for help when he saw Lopez on the floor of his cell, but the 41-year-old man did not receive medical attention for an hour despite policy stating that detainees need to be checked on every 15 minutes.

“The 15-minute checks were not done because the lock-up (workers) were watching the Cubs game,” said First Deputy Corporation Counsel Jennifer Notz.

In the third police-related case, Chicago officer John Poulos was off-duty and leaving his family’s Lincoln Park sports bar on Aug. 31, 2013, when he spotted a man trying to break into a building from the second-floor back porch.

Poulos, who said he was cutting through an alley on the way home, identified himself as a police officer and ordered the alleged suspect, Rickey Rozelle, to come down while he called for police personnel.

Poulos contended that he saw a shiny object in Rozelle’s possession and that the suspect wouldn’t show the officer his hands.

Investigators said that no gun was found on or near Rozelle in the fatal shooting.

“The individual was shot during an off-the-job standoff,” Burke said.

— Chicago signs off on police settlements —