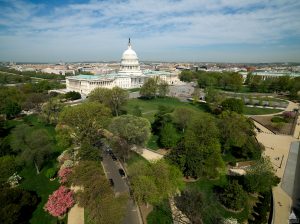 An area just west of the U.S. Capitol building will be closed off to traffic from 3 a.m. to 6 p.m. Jan. 21 for the Women’s March. (USCapitol photo)

On Jan. 21, women from all walks of life will wake up ready to march.

The buses will drive through the night and will arrive in the morning of Jan. 21. Buses will park near a D.C. Metro line four stops away from march’s starting point at the corner of Independence Ave. and 3rd St. SW.  The rally lasts until 5 p.m.

A lot of the experience is the connecting with other people you have on the bus,” said Deb Quantock McCarey, of Oak Park.

A Democratic Party volunteer and freelance journalist, Quantock McCarey worked for Obama campaigns in 2008 and 2012 and served as “bus organizer” for canvasing trips to Wisconsin and Iowa. Her first D.C. rally was a family affair in the 1990s with two young sons and husband in tow. It was part of giving the children a variety of experiences.

“The esprit de corps was really strong and we ran into people who were really wild and fun,” she said.

This  time D.C., she’s pushing her limits. With severe visual disabilities, Quantock McCarey will be trusting a friend and others to help shepherd her through the crowds.

“The added Metro trip is a little scary and there will be a chance to get lost,” she said. She’s looking for a “recharge” from the rally, she said.

“It’s time for people who have been really hard hit by this election to wake up and look for two years away,” she said. “I’m taking my tape recorder with me,” she said.

Anna Felicity Friedman, her boyfriend David and her young daughter of Forest Park will drive to the rally and stay with a D.C.–based uncle.

“The day after the election, I was so despondent,” she said. Attending the impromptu Chicago rally Nov. 9 buoyed her spirits. “It was amazing and so energizing, yet peaceful and powerful,” she said.

Friedman, a history professor and social media marketer, offered to help organize the online media for the women’s marches in Chicago and D.C.

“Moderating comments and things being behind the scenes, it was just phenomenal to see this grassroots movement come together in a matter of weeks. That was incredibly inspiring,” she said.

Even though she was taught to knit as a child, Friedman said her first pink “pussy” stocking cap took about five hours to make.

“I still have a lot of knitting to do,” she said.

“The fact that so many women embraced making a craft, a handmade garment for this march, is such a perfect thing. It’s such a symbolic connection with traditional women’s work,” she said.

Friedman’s second-grade daughter was allowed to watch Illinois Congressman Luis Gutierrez’s “PG” explanation of why President-Elect Donald Trump said things that were disrespectful to women, Friedman said. Her daughter already has her own idea for a sign:

“Donald Trump: No grabbing women by their privates. Only their parents and their doctors can.”

When Friedman gets home, she plans to use some of the media strategies she’s learned to help candidates in a local school-board race.

“These little local races are where it’s at,” she said. “This is where we can have the most effect.”

Carrie Bankes and her 15-year-old daughter will bus to D.C. with a group of friends, even though Bankes said she’s not a typical political rally attendee.

“I’ve been downtown when there are rallies. I’ve gone to Springfield. This is exciting. It’s very empowering to come together with a bunch of people you don’t know with a common passion. I think I know 20-25 people who are going.”

Her daughter is more of a firebrand feminist, Bankes said. “I look at [her] and say, ‘you’re the future.’”

“I’m marching because I want the world to know that we will not sit quietly while discrimination and hatred is not only tolerated, but encouraged by the president and his cabinet,” her daughter wrote in a statement.

Bankes says her sign will read: “REAL NEWS: Most Americans voted for a woman.”

For Lauren Guydan and her daughter Jane, the mission is one they say they can get on board with.

Guydan, who recently moved to Chicago from Naperville, will join her daughter in D.C. this week to protest inequality and promote peace.

“I’m a new activist,” the 52-year-old mother said. “I was very disappointed with the outcome of this election and felt now is the time. It’s one thing to complain how things are going. But, I’ve always believed ‘put up or shut up’. I don’t want women’s rights to backslide. I know my life and my daughter’s life is partly made possible by the women who came before us, and now it’s our turn.”

The retired School District 204 employee said that now that her life has slowed and her children are grown, she wants to dedicate more time to helping others.

“I can’t just sit back and let hard fought rights and changes be put aside,” she said. “I feel like I have a moral duty to fight for my beliefs.”

So, Guydan and her daughter Jane, 23, will join hundreds of thousands of women in Washington where they will march for women’s rights.

She said she’s excited to see “seas of people” united for the same cause.

“I grew up learning about the civil rights movement and women’s lib,” Guydan said. “Most of that was over by the time I was old enough to be aware of it. Someday, people will talk about what we did (in Washington), and that’s something I can’t miss.”

Others, like Oswego mother Alyssa Thomas, have also felt the call to action.

Although she can’t make it to Washington on Jan. 21, Thomas will join friends and family in Chicago where a sister march is scheduled.

The Women’s March on Chicago will start at Petrillo Bandshell in Chicago’s Grant Park at 10 a.m. on Columbus Drive just north of Jackson Drive.

“I’m marching for my children,” Thomas said. “Right now (my twin girls) don’t have any idea that they will have a different experience or different opportunities than any boy will. They don’t think there’s a difference between what girls and boys are capable of. We need to do something now so they don’t have to deal with any kind of gender inequality.”

Marching also means thinking about and considering the rights and feelings of those outside her family, said Thomas. It means popping her own “bubble” and standing up for strangers.

“I think if I can do something, I’ll do it,” Thomas said. “I vote. I donate money when I can. I volunteer when I can. So, when women from across the country peacefully come together to promote inequality, the very least I can do is show up.”

For Thomas, the march is less about the results of the presidential election and more about ever-present issues facing women across the world. The issues are bi-partisan, she said.

“Women are 50 percent of the population, but we’re not treated like we’re equal and that’s a problem. We can’t say we value freedom and democracy over everything else if we don’t treat everybody the same way,” Thomas said. “Some people are marching because of the election, but the bigger picture are issues of inequality. It’s not just this administration’s problem. It’s all administrations’ problem.”

For details about the Women’s March on Chicago, visit womens121marchonchicago.org.

Erika Wurst contributed to this story