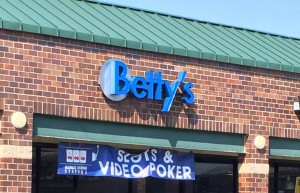 : Casino cafés began to pop up in 2013, with names like Dotty’s, Betty’s Bistro or Stella’s. (Chronicle Media photo)

State-sponsored video gambling has been legal in Illinois since 2012, but 34 Cook County municipalities have resisted its allure either by opting out of the law, or passing specific ordinances against it, according to the Illinois Gaming Board website.

However, some of these holdout Cook County towns are taking a second look at video gambling, spurred on by restaurateurs and bar owners who say they can’t compete with establishments in neighboring towns.

In Riverside, restaurant owners have begged for video gambling to “level the playing field” and attract more business to downtown. In Palos Hills, a special category of liquor license was devised for video gambling cafés, which are said to appeal to women who don’t want to wager in a bar. In Forest Park, anti-gambling residents and business owners are preparing for a battle after the mayor hinted the village would be considering changing a no-gambling ordinance to boost town revenue.

Last fall in Riverside, restaurant owners begged the Village Board to consider video gambling. Owners of the Chew Chew Restaurant and Mollie’s pub told the trustees they need video gambling revenue to “level the playing field” with restaurants in neighboring Berwyn, North Riverside and Lyons.

In Berwyn, bar-owners earn an average of $8,790 tax-free revenue per video machine in 2015, according to the Illinois Gaming Board website. Establishments can have as many as five terminals.

“Gambling did not increase crime or police calls for service to establishments that have gaming,” Weitzel’s September 2015 report said.

Weitzel said he also examined data from the Illinois Gaming Board.

“What they saw as the No. 1 problem is burglaries,” Weitzel said. “Somebody would break into a bar or restaurant with video gambling because they thought the money was still in the machines.”

Riverside residents opposed to video gambling showed up in force at the November 2015 village board meeting after amassing hundreds of signatures on an online petition.

The board has not brought the matter to an agenda.

“We decided in an ideal world, we should start with the research first,” said spokeswoman Kristine Herbst, noting there aren’t that many restaurants in Riverside. “If this is out there we want to explore it.”

“To generate $100,000 per year in local taxes, gamblers would have to lose $2 million per year,” Gilroy said. “That gambling income doesn’t drop from heaven, it comes from families’ pocketbooks. Gambling money simply redirects what could have been used for local grocery stores, gas stations, furniture stores, thrift stores, church collection baskets, mortgages and rent.”

Larry Forssberg, Westmont Economic Development Director said the typical local gambler is a “woman over 35 years old.” Forssberg said local municipalities could use zoning codes to control signage or whether terminals are visible in a restaurant. He also said local towns can use zoning to reward local business owners and discourage chain operators from moving in. He said the promise of video gambling can lure companies to town that might otherwise ask for a tax rebate.

In Palos Hills, aldermen voted in December to expand the village liquor license categories to include a video gambling café license with a special $2,000 license fee. As a non-home-rule community, the town can only charge license fees of $25 per video gambling machine, while home-rule towns have been known to charge up to $1,000 per terminal yearly.

Casino cafés began to pop up in 2013, with names like Dotty’s, Betty’s Bistro or Stella’s. The business model provides video gambling in a feminine-style environment to attract female gamblers who are uncomfortable entering a bar.

“Video cafés are basically a turbo-chef oven with a couple of machines,” said Forssberg.

Critics, such as the national Stop Predatory Gambling group, have said video cafés expose children to gambling and are exploiting a loophole in the gaming law that allows any establishment with a liquor license to install video gambling machines.

Palos Hills earned $65,000 in 2015 in tax revenue from the village’s 29 terminals, according to the IGB website. Neighboring Palos Heights and Palos Park prohibit video gambling.

In Forest Park, Mayor Anthony Calderone has told business owners he plans to bring video gambling up for discussion among village commissioners in the next few months.

Calderone did not return calls and texts by press time to comment on the village’s timetable. But at the village’s 2015 budget meeting, Calderone said Berwyn’s video gambling revenue was enviable.

Calderone, who serves as village liquor commissioner, also liked the idea of a special liquor license tied to video gambling.

“For those establishments that would have a machine, we could create a separate liquor license classification and increase the fee $5,000 for that particular type of license,” he told commissioners.

“It’s incumbent upon all of us to lessen the tax impact to the local homeowner,” he said. “Let’s try to capitalize on things that we can raise revenue on without encroaching on that property owner, whatever that may be.”

Police Chief Thomas Aftanas said he believed the village would discuss introducing video gambling at the upcoming spring budget meeting, usually held in May or June.

Aftanas said he was not aware of any recent study or police training for crime related to video gambling. He also said his impression was that neighboring police departments didn’t consider it a crime problem.

The village has projected in the past that it could earn as much as $300,000 per year in revenue. Neighboring Berwyn earned $394,000 in tax revenue in 2015. But Berwyn residents say that tax money has come at a price. In a town of four square miles, there are 224 video terminals at 53 restaurants and bars. Neon signs advertising “live slots!” line Roosevelt Road.

“We passed video gaming in 2009,” wrote Berwyn Alderman Marge Paul March 23 on a Berwyn Facebook page. “I regret my vote in favor of it.”

In 2015, the Illinois Gaming Board revealed that one Berwyn operator, Vince Dublino, was illegally licensed by the state even though he had admitted under oath in court in 2002 that he previously ran a ring of illegal poker machines on behalf of a mob-connected partner.

Video gambling is currently prohibited in Forest Park under a catchall ordinance that prohibits gambling of any kind. Shortly after video gambling went live in Illinois, the mayor hosted a town hall where bar owners begged for the new revenue. But residents voted overwhelmingly against it twice in 2013, once in a paper survey sent with water bills and once in a nonbinding referendum.

Former Village Commissioner and bar manager Mark Hosty was discovered to be lying on his video gaming application with the Illinois Gaming Board when he said his bar had no connection to anyone in village government. He was voted out of office in April 2015.

Already business owners and residents who oppose it are getting ready for a fight. Signs against video gambling are popping up in windows along the business district on Madison Street.

Connie Brown, owner of Brown Cow Ice Cream Parlor said she sympathized with her bar-owning friends who felt they couldn’t compete with bars in neighboring towns. But she thought video gaming would “change the vibe we’ve worked so hard to create.”

“What we need here is business development and marketing,” Brown added. “It’s not the easy solution — it is a long-term investment. But I feel it is the right solution.”