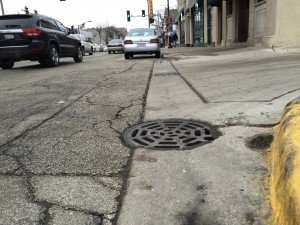 Sometimes after a spate of clear weather in Cook County, the area’s century-old combined sewer systems in Chicago and neighboring towns make themselves known by the smell of sewer gas wafting up from street storm drains.

Jess Vetter of Forest Park has noticed it in the village’s central business area at Madison Street and Circle Avenue.

“We smelled it with some visiting teenage kids who were doing the teen thing of gagging and making all kinds of horrible noises,” she said.

Residents of Forest Park have been making a stink on an online village social media page about the intermittent smells of sewer gas invading their nostrils in certain parts of town.

“I have noticed the sewage smells all over town [from the storm drains] as far back as September,” wrote Forest Park resident Jason Fustar in an email. Fustar said the smell even crept into his apartment.

But it’s not only happening Forest Park.

“This a situation that happens in all major cities across this country that have a combined sewer system where the catch basins for storm water go into the same pipe with residential sewage,” said David St. Pierre, executive director of the Metropolitan Water reclamation District. The MWRD website lists more than 80 local towns and townships that have combined sewer systems.

The street catch basins have a drain trap “similar to the one in your kitchen sink” that holds about a bathtub’s worth of standing water which blocks sewer gas from seeping into the atmosphere, St. Pierre said.

In a dry spell, water in that drain trap evaporates he said, permitting the escape of sulfide gasses emitted by anaerobic (no oxygen) bacteria interacting with sewer waste. These gases are detectable by the human nose at tiny quantities of around one part-per-billion.

“If it doesn’t rain, you don’t have a lot of water in your system and the water can evaporate and break that seal,” St. Pierre said. “Many towns just open up a water hydrant in the warm weather and refill the trap,” St. Pierre added.

The problem is hard to track down for village officials dealing with the smell, said Forest Park Village Administrator Tim Gillian in an email.

“A typical scenario is that we receive a report go to the area and the smell has dissipated,” Gillian said. “In some cases our team has smelled the odor and started working on the cause and it goes away.”

When weather permits, the public works sewer truck has been cleaning basins and “jetting all the way through,” Gillian said. “This operation did yield a few minor blockages, and some debris that could have been causing the issue. We are going to keep cleaning those lines throughout town so that we are sure of that aspect,” he added.

There’s no device that can capture and measure the amount of sewer gas in the air, said Kim Biggs public information spokesperson for Illinois Environmental Protection Agency.

“Unfortunately it’s a subjective thing and some people’s noses are more sensitive to it than others,” she said.

“We see a number of causes,” Biggs said. These included a block in the line, combined sewer systems and stagnant water in the line, she said. “Or maybe someone dumped something inappropriate down the drain.”

Fustar said he sometimes thought he smelled some kind of chemical masking agent. “It smells like the chemical used in Port-A-Potties, as though somebody poured it there to cover up the smell,” he wrote.

The combined sewer systems have been a problem for flood-plain Cook County towns near the Des Plaines River over the past few years. Heavy rains have overflowed combined systems and flooded basements in Forest Park and neighboring suburban villages.

As for Forest Park, the village has taken steps to map the sewer and hopes to replace it piece-by-piece with a separated system over the next decades. Costs could run as high as $60 million, Mayor Anthony Calderone has said.