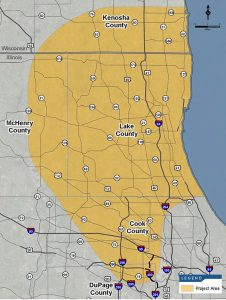 The re-named Tri-County Access Project map showing the area encompassed for the designation. (Graphic courtesy of the Illinois Tollway Authority)

When Gov. J.B. Prtizker replaced the nine board members on the Illinois Tollway Authority in mid-April, it signaled a shift in policy and direction.

On July, 12, new ITA Executive Director Jose Alvarez notified the other board members that the environmental impact study for the Tri-County Access Project, also known as the Route 53/Route 120 Extension Project would no longer provide funding by asking the Federal highway Authority to rescind the effort.

Citing additional monies required to complete the study, as well as a loss of support from local stakeholders, including the Lake County Board, Alvarez made clear the estimated remaining $25 million to complete the EIS could be better spent. To date, he noted that $13 million had been spent on the contracted study with two firms, the Englewood, Colorado-based CH2M Hill, Inc. and Knight E/A, Inc., of Chicago, sharing the payment on retention.

The Illinois Tollway Authority Board passed a resolution in December 2015 to authorize a nearly $45 million environmental impact study, with a $6 million opening annual outlay and an initial timeline for the report to be finished in 2020. The EIS would determine the corridor’s viability of extending Route 53 through Lake County, from its southern terminus at Lake-Cook Road, north to Route 120. A Blue Ribbon Advisory Committee comprised of Lake County and municipal officials supported and endorsed the project.

A mid-May 2016 announcement, from then-Lake County Board Chairman Aaron Lawlor, pulled his support in favor of a nature corridor or other use. Last month, the Lake County Board shifted its strategic plan to “monitor and utilize the data developed from the EIS on Route 53/120 to help engage stakeholders in a process to evaluate and consider alternatives.”

In his statement, Alvarez said, “At this time, the Illinois Tollway is not in a position to lead the development of a project that lacks both local consensus and clear financial viability. Over the past several months, I have taken the time to learn about this study, engage stakeholders, and listen to the position of local leaders on the future of transportation in the study area. It is clear to me that, based on these discussions, this is the right decision.”

Proposed in the early 1960s, the intended Route 53 pathway carries a right-of-way designation as a federal project, marked by signage, F.A.P. 342, across county highways, farm fields in the Lake Zurich-Hawthorn Woods region, through a residential subdivision in Mundelein, and end at Route 120 in the Volo-Lakemoor area. The 25-mile corridor, estimated to cost between $2.3 billion to $2.65 billion, contained a funding gap said to be $1.36 billion to $1.91 billion.

The BRAC report indicated the cost by supplemented by tolls, a 4 cents-per-gallon gas tax across the county with half the generated revenues going to the Route 53/120 project. Another proposal was the creation of a special taxing district to “capture 25 percent of the real estate value for adjacent new nonresidential development,” according to county information, at the time.

By April 2018, the project carried the new moniker, the Tri-County Access Project, widening its scope by encompassing eastern McHenry County and the Wisconsin border under the umbrella title, with a stakeholders’ meeting held one month earlier to unveil the designation. The entire project was seen as an economic engine for the northeastern part of the state, also addressing traffic infrastructure. 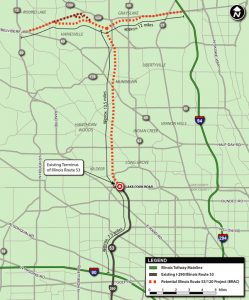 The original route 53 extension area, as depicted in 2015. (Graphic courtesy of the Illinois Tollway Authority)

Currently the only major traffic access for McHenry County is “Exit 36,” an interchange with the I-90 Jane Addams Memorial Tollway and Route 23 giving entry to the city of Marengo and western McHenry County. It is slated to open in 2020.

Alvarez’s letter to the ITA board members coincided with the Lake County recommendation of sharing the already-obtained data with “local stakeholders proceed with their transportation planning efforts.  The data in these studies will provide a foundation for any future state or federal efforts to improve transportation in the region.”

Further, an Affected Environment Memorandum identifying features of the existing natural and human environment will be supplied to stormwater management agencies, forest preserve districts, and ancillary resource agencies. A Transit Only Alternative scenario will be delivered to transit agencies, and county transportation departments, to research dedicated transit routes and expanded transit services. A Public Involvement Summary will be delivered to local transportation agencies to inform future planning activities, based on public input.

The corridor property is actually owned by the Illinois Department of Transportation, which will also receive the data, and any efforts regarding the corridor would have to be negotiated with the state agency. “No decisions have been made (on future use) but IDOT is committed to working with local stakeholders to help determine the best and most effective use of the land that’s been acquired for the project,” said Guy Tridgell, IDOT’s director of communications.