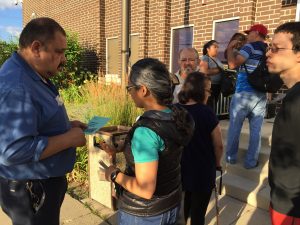 As family members make their last visit to loved ones facing deportation at the Broadview Immigrant Detention and Deportation Center, they are allowed to bring a small travel bag and only enough money for the trip.

For the final goodbye, family members have one-to-three minutes — with no hugs, kisses or touching of any kind permitted.

A one-story brick building, run by the Department of Homeland Security’s Immigration and Customs Enforcement (ICE) sits in an industrial park off of 25th Avenue and the I-290 expressway. This is the last stop for 40-100 deportees who are transported every Friday from across the Midwest including Michigan, Wisconsin, Illinois, Indiana, Missouri and Kentucky.

Mexican nationals are sent to New Orleans, where they spend a few days. Some are transported to Tamaulipas, south of the Texas border; others are processed through the ICE detention center in Chaparral, New Mexico and then sent onward to Mexico City. Central Americans and other nationals first arrive in Texas and then are transferred to New Orleans, where they wait for an airplane to transport them to their country of origin.

On Friday, July 15, Jorie Hoare, of Round Lake brought two children, ages 5 and 13, to an emotional parting from her husband and father of her children, Arthur Hoare, 41, who will be sent back to his native country of Belize. Their family hasn’t been the same since they had to say goodbye, she said afterwards in a phone interview.

“The first night [our daughter] was up half the night, screaming and crying,” Hoare said. “Harris, our son, when he gets tired he wants his daddy but he’s so rambunctious, you know, so it’s probably not on his mind as much as it is for Savannah and I.”

They were not allowed to touch Arthur, even though it was most likely the last time that she and their children would get to see him for a long time.

“Why couldn’t I touch him? I don’t understand that,” Jorie Hoare said. “At one point [the guard] said, ‘You have to give him the money now’ and that was the extent of me getting to touch him, passing him the money that we brought.”

For 10 years, a group of nuns and volunteers called the Interfaith Committee for Detained Immigrants (ICDI) have gathered outside of the Broadview staging center during Friday morning deportations to pray for the immigrants and their families. They are joined by student volunteers from University of Chicago’s Coalition for Immigrant Rights, who bring coffee and doughnuts and explain the process in Spanish to family members.

On a recent Friday morning, Brother Bede Baldry, of the De LaSalle Christian Brothers, recited the rosary in front of a painting of the Virgin of Guadalupe.

“We pray for families who have experienced the devastation of raid and deportations. For the children who have lost parents; for the husbands and wives who were left alone to take care of their families; For all undocumented people who experience fear and live in a state of uncertainty,” he said. Baldry read names of people being deported that day.

“All of our programs started here [in Broadview] in 2007,” said Sister Pat Murphy, RSM. “The impact of witnessing what happened here deeply touched us and gave us the impetus to fight.” 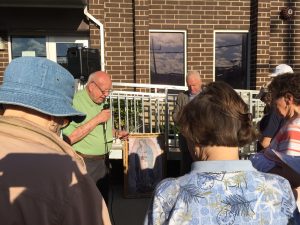 ICDI’s founders Sister JoAnn Persch, RSM, and Murphy, said that after a while of simply gathering to pray and seeing the positive effect that this had on families like Arthur’s, they asked ICE to let them accompany the families inside of Broadview.

“It took about three years of hard work before ICE allowed us to go inside, but now we can go inside with the families and talk to anyone who might want some pastoral care,” Persch said.

Volunteers are also allowed into the buses where many detainees wait without any family members who were able to come say goodbye.

She praised the guards and employees at Broadview who, she said, treated detainees and families with respect. “[Guards] don’t bear any grudges. They are there to enforce the law as it’s given to them,” she said.

It may take immigrants years to end up at Broadview after being detained. Immigrant detainees are housed in one of five county jails in Illinois and Wisconsin. These detention centers are located in Dodge County Jail, McHenry County Jail, Kenosha County Jail, Tri-County Jail (located in Pulaski County) and Boone County Jail.

After visiting Broadview for two years, the sisters of IDCI asked for permission to enter the long-term county jail immigrant detention centers. IDCI got an Illinois law passed in June of 2009, with the help of State Rep. Jack Franks (D-Marengo) and State Rep. Daniel Burke (D-Chicago), allowing volunteers to visit detainees, according to news reports.

According to ICDI, some of these jails hold undocumented immigrants in separate wings of the facility. However, in most they are mixed in with the general population of convicted criminals regardless of the fact that being undocumented is a violation of civil law, not criminal law.

“Some people can be detained for years as they appeal their case,” said Persch.

Prisoners and their families have very little warning that deportation is imminent. Usually a family gets a phone call the night before telling them their family member will be shipped out of Broadview about 7:15 the next morning, Persch said. Most deportees have no one to see them off, but some family members drive for hours from as far away as Green Bay, Wis., Persch said.

Jorie Hoare rushed her family to Broadview on July 15. Her husband Arthur Hoare was brought to the U.S. at age of 8 and grew up in Evanston with a large extended family, his wife said.

“He’s been here pretty much his entire life. He wouldn’t have known any different, you know, I don’t know how they expect children to turn themselves in,” said Jorie Hoare. “When kids come over here, I don’t think they’re told the whole story and I’m not sure that is the child’s fault.”

The couple have been married for more than 10 years, and Arthur has worked in the U.S. for 30 years.

Kate Kinser, who has volunteered with ICDI off and on since 2008, said, “For decades, businesses and law enforcement will look the other way and then suddenly … they don’t.”

Criminal convictions eventually put Arthur on ICE’s radar. According to the Lake County State Attorney’s office, Arthur Hoare was convicted of a Class 4 felony cocaine possession in 2012, for which he got 24 months supervision. He was convicted of a misdemeanor battery charge in 2014.

According to Public Affairs Officer for ICE, Gail Montenegro, ICE prioritizes the removal of undocumented immigrants with criminal convictions by placing them on a “civil enforcement priority list.”

“Ninety-eight percent of all ICE [fiscal year] 2015 removals, or 230,715, met one or more of ICE’s stated civil immigration enforcement priorities,” Montenegro said in an email. 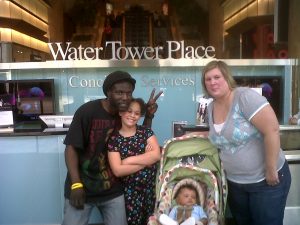 The Hoare family in Chicago.

Hoare said that Arthur has struggled with an alcohol addiction for much of his life that occasionally got him into trouble with the law, but does not think that this is justification for deportation.

“He’s no different than a ton of Americans who have drug and alcohol problems. He was upset about not being able to become an American citizen and having that over his head his whole life bothered him,” Jorie Hoare said.

Arthur is a “wonderful husband and father,” she added. “He has a lot of friends, you know, a lot of people adore him. There is a bond between my son and him, his dad, that I’ve never seen before.”

Arthur’s employer David Skeen wrote a letter to ICE on Arthur’s behalf saying he was a talented carpenter and a hard worker:

“He arrives at work on time, shows initiative and works well with his coworkers. He will have a job with me as long as he wants,” Skeen wrote. “I consider him an asset to my company and look forward to the day when he can come back to work.”

Jorie Hoare said that they are still fighting to vacate Arthur’s order for removal and that she submitted an application for an I-130 ‘alien card’ for him. The couple has spent $10,000-$15,000 on criminal and immigration lawyers, she said.

Arthur is being held at a detention center in Louisiana until he can be put on a flight to Belize. If he is sent back to Belize, the chances that he will ever be able to return to the U.S. are, “slim to none,” she worries. Hoare said that she does not know what their family will do if this happens.

“They’re destroying families,” Hoare said. “It’s not just one person that this impacts.”

“The only thing that is going to change any of this is if the laws change,” Persch said. “We just need comprehensive, compassionate immigration reform and we need our Congress to think of immigrants as human beings who are children of God and deserve to be treated with dignity and respect.”

In 2009, a quota was passed through the U.S. Congress with the Dept. of Homeland Security Appropriations Act of 2010. The “detention bed mandate” calls for ICE to fill 34,000 beds in 250 facilities across the country, per day, with immigrant detainees. This quota applies to a network of county jails, federal prisons and private prisons across the U.S. The bed mandate costs taxpayers more than $2 billion per year, according to the Chicago-based National Immigrant Justice Center.

If ICE ever fails to meet this quota of detainees, their funding is cut significantly until they reach this number again even if there are no new undocumented immigrants to detain that align with their civil enforcement priorities.

In March, 58 U.S. members of Congress asked the Dept. of Homeland Security to remove the prison bed mandate in their 2017 budget. They said best law enforcement practices used detention beds “based on actual need.”

Money saved by getting rid of the mandate would “permit the Agency to focus limited resources on its many other responsibilities, including investigating drug smuggling, human trafficking and child pornography,” the letter said.

No other U.S. law enforcement agency is subject to any quotas for the amount of people they detain.

Jean Lotus contributed to this article.