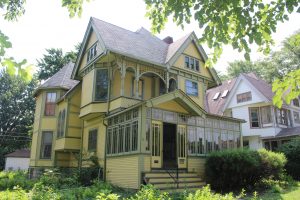 Owners of Illinois historic properties are often excited at the prospect of having their building declared a “local landmark.” But the developer-owner of an 1890s era Berwyn Queen Anne Victorian mansion, says neighbors and preservationists are pressing to have his property “landmarked” without his permission or even notifying him.

“Nobody contacted me whatsoever,” said Mark Fiebig, of Darrien, in a phone interview. The house at 3441 S. Home Ave. is now is under contract.

The race to submit the house to the advisory Berwyn Historic Preservation Commission for landmark status while a sale is pending, exemplifies the struggle between Berwyn preservationists and “flippers” as the town recovers from the real estate slump and bargains are still to be found.

A brass plaque by the front door indicates the house was given special attention by the Berwyn Historical Society.

High-quality historic housing stock in Berwyn generated the town nickname City of Homes. But some residents fear developers looking for a quick buck will tear down homes, build inappropriate additions or tear out historic elements such as bungalow art glass.

Adding drama to the speculation is the fact that developer Fiebig formerly served as Berwyn’s Building Director until 2004, and is said to have a close relationship with Mayor Bobby Lovero, a real estate lawyer, with whom Fiebig once shared ownership of a racehorse.

Fiebig says he hasn’t lived in town for 10 years and Lovero has no influence on his business. He said he buys, remodels and flips between five to 15 houses in Berwyn and neighboring towns a year.

“I build in lots of communities, and if you take a look at any of my projects they are fabulous,” he said. “We rehab completely down to the studs with new electrical, plumbing heating and cooling.”

Fiebig describes the Home Avenue house when he acquired it in April as “a blighted mess with eight-foot weeds and broken windows.” Fiebig said the house doesn’t differ that much from others in Berwyn. “It’s sat there for 120 years,” he said. “There are [many] like it in Berwyn.”

But neighbors and old-house enthusiasts see a home built in 1895 and owned by only two families, with almost all of the original Victorian adornments intact.

“I walked my dog past that house maybe a couple thousand times,” said neighbor and old-home enthusiast Jamie Franklin. “I’ve always wanted to get inside there so badly and see the old Victorian elements. It’s like a dream home.”

Franklin, a lawyer, and former commissioner on the BHPC, researched and authored the landmarking application submitted to the commission.

According to the application, the house is significant for its inhabitants. Members of the A.C. Nielsen family of the international marketing company fame, lived there in 1920, U.S. Census records show. The house was also designed by famed Gilded-Age architect, George F. Barber, a self-taught home draftsman whose mail-order designs were used to build Victorian houses across the country. Massachusetts Architect and Barber historian Christopher DiMattei called Barber’s designs a “barometer of the aesthetic and cultural aspirations of the late nineteenth century American public.” 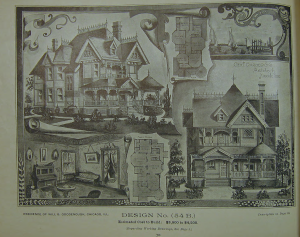 The house and its twin next door were created from Barber’s pattern book design 54B, which was estimated to cost between $3,400-$4,000 to construct. Architectural elements that make the house unique include the “prominent front gable, asymmetrical façade and side elevations, overhanging eaves, polygonal bays, front, side, and back porches, second-story balcony, differing patterns of texture (fish scales, shingles and clapboard), spindles, leaded windows, and decorative brackets,” according to the landmark application.

The home’s second owners, Czech immigrants Joseph and Georgine Legner, bought the house in the 1940s and died in 1992 and 2000. One of their children lived in the house until 2016. The house is generating interest on a social media page dedicated to preservation in Berwyn.

The house and its double at 3445 S. Home Ave. appear on the commission’s “master list of significant structures”, last updated in 2011. A brass plaque by the front door indicates the house was given special attention by the BHPC.

The BHPC hearing for the home is scheduled for Aug. 11. The commission has seen little activity in the past few years and the website appears not to have been updated since 2014.

A “landmark” designation, once approved by the City Council, prevents owners from acquiring a permit to alter the outside of a structure without a “certificate of appropriateness” from the BHPC. Some owners avoid landmark designations because they interfere with future use of a property.

International Preservationist Vince Michael, a former trustee of the Global Heritage Fund, says value in a neighborhood increases with appropriate zoning and preservation of historic properties.

“The basic idea of landmarking, like zoning, like any kind of use or density restriction, is to serve the public good,” Michael said in an email. “Of course you can landmark without consent of the owner,” he wrote, but communities risk losing federal or state preservation funds. “Having said that, politically people avoid getting other people angry, so the majority of landmark designations have consent of the owner,” he wrote. “Real estate is the only asset with almost exclusively externalized value (Location, location, location). When a community guarantees that I can’t put an abattoir next to a nursery school or a power plant next to a nursing home, they are preserving not only public welfare, but private assets,” Michael wrote.

Fiebig said he acquired the four-PIN 6,150 sq. foot parcel, with the house and a 30-foot side lot, from a Downers Grove realtor in “an estate sale.” A purchase price of $125,000 was reported by the Cook County Recorder of Deeds, but Fiebig said he paid significantly more. He declined to give the actual purchase price paid. The house and land have a market value of $236,640 according to the Cook County Assessor website.

Fiebig said the side lot is the legal size required to build a new house in Berwyn without any type of zoning variance request. But neighbors complained the empty lot to the north should be left as a side yard. Two mulberry trees, marked with pink spray painted Xes appear to be doomed for removal.

Fiebig said he was puzzled the neighbors were attached to the empty lot because when he bought the house, it was choked with massive weeds.

Fiebig worried that controversy or the landmarking process would somehow interfere with the sale of the house and lot. He questioned the motives of the preservationists.

“Why are they objecting to me selling this building?” Fiebig asked. “I think this whole thing is a political football,” he said.

It remains to be seen how new owners will react to landmark status, if granted by the City Council.