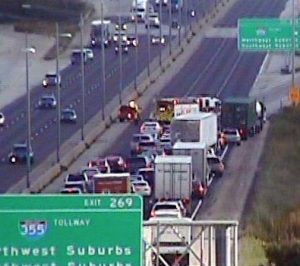 In six years, assuming the state’s current rate of investment in roadways, the number of acceptable state roads will drop to 65 percent, accodgint to Randall Blankenhorn, secretary of the Illinois Department of Transportation. (Photo courtesy of IDOT)

Without an infusion of money, more than one-third of Illinois roads will be in unacceptable condition in just more than five years, according to a state transportation official.

Randall Blankenhorn, secretary of the Illinois Department of Transportation, said the state is already below its goal of 90 percent of roads being in acceptable condition. He said currently 83 percent of state highways and roadways are labeled “acceptable.”

In six years, assuming the state’s current rate of investment in roadways, the number of acceptable state roads will drop to 65 percent, he said.

“That’s a direction we can no longer go in,” Blankenhorn said. “Stakeholders say the current state of roads is not acceptable to them.”

The IDOT secretary said that state leaders need to get to a point where they are investing in the life cycle of a project and not just when the roadway or highway falls into disrepair.

“Just like a car needs to have oil changes regularly to keep running, we need to look at how we do that,” Blankenhorn said. “We’ve got to start thinking of a pay-as-you-go mechanism.”

Part of that mechanism may be an increase in the state’s portion of the motor fuel tax.

“This is only a Band-Aid,” Szabo said last week before a hearing of the state House’s Roads and Bridges Committee. “For the longer term, we are going to need more efficient user fees — a vehicle miles traveled fee (viewed by CMAP as the strongest option), motor fuel sales tax and registration fees.”

“These choices are never easy, but the alternatives of reduced safety, economic stagnation and the diminished quality of life are far worse,” Szabo said.

The IDOT representative said that he is not opposed to borrowing money for major projects, but that the state needs to find better options for smaller undertakings.

“It doesn’t make sense to me to borrow money for 25 years for an improvement that is going to last for 10,” Blankenhorn said. “We’ve got to find a better way to invest our resources.”

Greg Bedalov, executive director of the Illinois Tollway, said one way more money could go into roads and bridges is for the state to go to a design-build concept for projects, where firms bid on both designing and constructing saving one step in the process. Currently, design of the road project is competitively bid and then a separate competitive bidding is held for construction of the project.

Bedalov said each project is different so the savings would vary depending on the project, but believed the state would definitely save money with the design-build strategy.

“I could say the state would save 10, 15 or 20 percent, but that would be just throwing darts at a dart board,” Bedalov said, re-emphasizing that savings would depend on project size. “Design-build would allow us to do more projects with the money we have.”

State Rep. Marcus Evans Jr. (D-Chicago), chairman of the Roads and Bridges Committee, said last week’s hearing was a chance to get more information about infrastructure in the state.

“We want to make sure we understand the cost of maintaining infrastructure,” Evans said. “We want to keep it in the forefront.”

CMAP’s Szabo noted that no economy ever grows faster than transportation can carry it. He said just for the state to maintain what it has in 2050 it is facing a $24 billion shortfall.

“CMAP analysis shows that we have reached a crisis that threatens to stunt our economic growth and negatively impact residents’ quality of life,” he said.