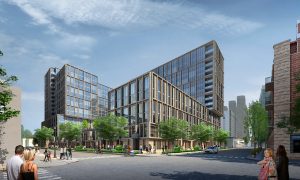 A 586-unit development is planned for Chicago’s West Loop. The project has gotten the approval of the Chicago Plan Commission despite commissioners’ concerns about growing density in the West Loop area. (Artist’s rendering courtesy of GREC Architects)

A $200 million development in Chicago’s West Loop is moving forward, despite planning experts’ concerns about future traffic issues from the growing density in the area.

The development, covering a full city block, will be at 845 W. Madison St. and features 586 multifamily units on top of 10,000 square feet of retail space. The 99,000-square-foot development will be on the vacant H2O Co. site.

The breakdown of the building’s 586 units will be:

Fifty-nine of the units will be “affordable,” according to the city’s Affordable Housing standards.

The Chicago Plan Commission gave the project a green light Thursday (June 15) despite some commissioners expressing concerns about the increasing density in the West Loop area.

The development will front Green Street, which has become a hotbed of residential development.

“Green Street is the new Rush Street for housing. Even I am concerned about the density,” said Commissioner Linda Searl, normally a proponent of high-density developments in the Downtown area. “I hope the developer thinks clearly about the project and pedestrians and provide as much access to alternate transportation as possible.”

Smita Shah, vice chair of the commission, was equally as concerned about the added density for the West Loop.

“I am normally density-happy, but we are adding so much density to the West Loop,” Shah said. “I am concerned about how we are going to manage the traffic flow.”

“We’ve been going around with this for two years,” Burnett said. “They started out with a different plan. In order to get to the Plan Commission, we had to build consensus. I am glad to see the project will have 10 percent affordable housing.”

The project was originally proposed as a four-building complex on top of a three-story pedestal. However, concerns from Neighbors of the West Loop and other local groups got the development reconfigured to two L-shaped buildings on a two-story pedestal. Further concerns over height and density of the project got the buildings reduced from 189 feet (17 stories) to 180.5 feet (16 stories) and from a proposed 627 units to 586 units.

Residents of the area, however, still have concerns about the development.

Grant Tucker, who lives next to the planned development, feels the project does not go far enough in addressing climate change issues.

“It is three times the size of any of the adjacent buildings,” Tucker said. “When you are making something 300 percent bigger, you need to do more.”

Tucker said that the project is so big it should be at the top of the Leadership in Energy and Environmental Design for energy efficiency. He suggested that with the development being across from Mary Bartelme Park more should be done to ensure pro-environment steps are taken, such as a lane in front of the development for electric vehicles.

“The buildings will be throwing shade on the park,” Tucker said. “Children are going to breathing Uber exhaust. I think the city deserves better.”

Wally Brown, a Green Street resident, said that a traffic study shows that drivers exiting the complex could be delayed up to 92 seconds.

“That’s a 50 percent increase from what occurs currently,” Brown said.

Brown also is not a fan of the development’s design.

“It just doesn’t fit in with the surrounding area,” Brown said.