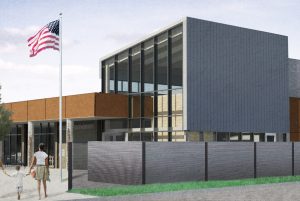 A concept drawing of the Broadview Library’s new expansion, which will sit on an adjacent 4,100-square-foot parcel of land next door to the building at 2226 S. 16th Ave which the library bought from the village for $42,500.

Broadview Public Library Board President Katrina Arnold said Friday she is cautiously optimistic the library may be able to move forward in its goal to build an addition and renovate the building with tax dollars the voters approved by referendum in 2012.

The hang-up has been an ongoing dispute with the Village of Broadview, which the library has sued twice to issue building permits and get the project going.

“We’re moving things forward and that shows what we are fighting for is true,” said Arnold.

Judge Diane J. Larsen, in Cook County Chancery Court, ruled Friday that variances in parking requirements and the project’s design, originally approved by the Zoning Board of Appeals in December 2013, could be considered approved, even though the village board had voted to overturn the variances about a month later.

“We got our variances approved,” Arnold said. “Now we have to apply for permits and you know it’s going to be another game.”

The library lawsuit names Broadview Mayor Sherman Jones and Building Commissioner David Upshaw, who also serves on the library board, and accuses them of “sabotage and delay” of the project.

If the logjam can be broken, the library’s new expansion will sit on an adjacent 4,100-square–foot parcel of land next door to the building at 2226 S. 16th Ave which the library bought from the village for $42,500. The library and village created an intergovernmental agreement in 2000 to use the land for an expansion. But the village backtracked on the 12-year-old memo, saying the agreement was not for a project that would require parking variances. 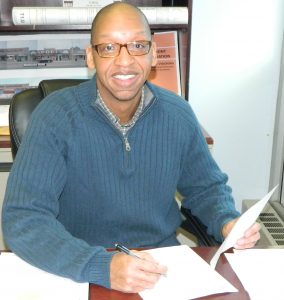 The project was approved by the Zoning Board of Appeals, chaired by Arnold’s husband Wayne Arnold, in December 2013. Upshaw complained at the ZBA hearing that Arnold’s husband was too close to the matter and should recuse himself. Arnold refused saying he served as the ZBA chair as a volunteer and so there was no conflict of interest. Wayne Arnold also said his wife served without compensation.

The village board voted to overturn the ZBA’s approval of the library’s addition in early 2014 and the project slammed to a halt. In December 2014, the Village of Broadview changed the powers of the ZBA to be just an advisory board, with final zoning say being granted by the village board.

Friday, Judge Larsen ruled the village could change the powers of the ZBA, but the ZBA’s past decisions would have to be upheld.

The library’s suit accuses the mayor of interfering in the library’s project and alleges he wanted to propose an alternate construction project at a different site.

Arnold told the Cook County Chronicle in March the mayor proposed a partnership with handpicked developers to build a commercial strip mall building with a library on the upper floor combining the library’s funds and private money.

regarding the feasibility of constructing a new building instead of expanding the existing facility,” said the village’s response to the library’s original complaint. Jones said in March he couldn’t discuss ongoing litigation.

When the library board turned the mayor’s proposal down, Arnold said, the relationship with the village became strained.

The library’s lawsuit describes disappearing architectural plans, a possibly false delivery signature and other alleged evidence that the village personnel, and Upshaw specifically, were sabotaging the project.

The village’s response denies the claims. The village’s lawyers assert that the village didn’t deny the library a permit because the library never asked for one. A multipage affidavit from Upshaw describes the permit process in detail.

Now that the library is armed with a court order, the next step is to submit to the permitting process and wait for approval. 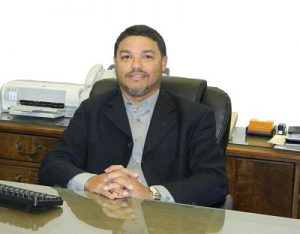 Meanwhile, Arnold said she and some of her fellow library board members were already making plans with architects and hoping to start building soon.

“I just knew we were going to win this,” she said.

The library has socked away more than $4 million for the project, based on a small tax paid by Broadview residents since 2012.

Arnold said on unexpected advantage of the multi-year delay is that the price of computers and other technology might be cheaper.

“We have an awesome new director and I think we will be victorious and get a wonderful new library for our town.” Arnold said.