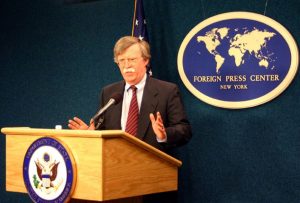 When you do provocative things like cancelling the nuclear treaty with Iran, and immediately piling up economic sanctions, you need a guy like former National Security Advisor John Bolton around. (U.S. State Department photo)

Numerous Democrats maintained President Trump’s recent ouster of John Bolton was a very bad thing, and they were right. But they didn’t seem to know why they were right.

They didn’t seem to get what had really happened because they — and Trump himself — viewed the situation from the perspective of Pennsylvania Avenue or some other lovely Capitol boulevard. They should have been thinking of how it looks from Chicago’s Wilson Avenue.

I will let my mother help explain. She once described in a sentence what Uptown’s main drag was like in the bad old days. “That’s where they’ll cut your throat, and then let the blood drip through the floorboards,” she said.

Today, it’s not quite the same. There are ice cream stores and vegan restaurants on Wilson Avenue now. But back in the day, men roamed the street who were philosophically OK about killing other men, often hand-to-hand, for no particular reason.

If you got into it with one of those guys, and you didn’t want to fight to the death, the most common way to get out of it was to pretend you were like them. It might give the other guy pause: “Do I want to risk not waking up tomorrow, and missing new opportunities to do more stupid things?”

One of the ways to convince a murderer that you, too, are a killer, is to put on a really convincing scary face, and maybe scream and spit and jump up and down. As an old friend of mine put it, “You know, you got to look crazier than they are.”

And you have to be willing to genuinely get crazy, fast, if your bluff is called.

John Bolton is that guy. He is on record as being crazier than anybody around. He’s come right out and said that there are several countries on Earth that we should be bombing. And what’s taking us so long?

Donald Trump is not that guy. He is a big weenie. But he is the guy who hired John Bolton.

So, whenever he challenged a country like North Korea or Iran, the North Koreans or Iranians had to wonder, “If we do one anti-social thing or another, who will we really be in a fight with — Trump or Bolton? And how big of a weenie could Trump be if he hired that maniac?”

For Trump, when you do provocative things like cancelling the nuclear treaty with Iran, and immediately piling up economic sanctions, you need a guy like Bolton around. Bolton, in fact, loved the cancellation idea. He also thinks bombing Iran is a great way to preserve peace.

For Bolton, scary comes naturally. Not for me. I remember being challenged in a tavern, along with another guy, to fight with two crazy guys in the alley. I was confident, but I forgot to act scary. In fact, I was smiling.

So one of the two crazy guys hid behind the back door, and hit the smiling idiot with a pipe or a log or something as soon as I crossed the threshold. I dropped like a rock.

But my pal, who was then between stays in the Illinois State Penitentiary, directed one look at the two nitwits, and they took off down the alley.

Trump is like me in that fight. He can smile and act like an idiot for a while, as long as Bolton is right behind him.

Now that Bolton’s been given the air, everybody knows that the scary guy is gone, and all that’s left is an old draft-dodger who is extremely unlikely to pull a trigger without significant encouragement. He’s too big of a weenie to even argue with his own scary guy.

Earlier this year, there were several sneaky attacks and incidents of relatively minor sabotage by Iran and Iran-backed Yemeni Houthi rebels in and around Saudi Arabia. In May, we made a show of sending ships and planes into the area, with Bolton growling that it was “a clear and unmistakable message to the Iranian regime that any attack on United States interests or on those of our allies will be met with unrelenting force.”

Bolton’s boss did give the order for a retaliatory attack, but famously called it back. Not very Wilson Avenue.

But it was extremely 5th Avenue. In glitzy business circles, there’s no shame in backing off. If the other guy rejects your bottom line, you can just move the bottom line up. It’s only money. Everybody understands.

That’s not necessarily the case in brink-of-war brinksmanship. If you draw a line in the sand, you can’t move it around, or the bad guys in Teheran, or Uptown, for that matter, will know you don’t have the intestinal fortitude. They’ll walk all over you.

Middle East mayhem-producers probably all felt more at ease after Trump turned tail, but they remained a little cowed as long as Bolton was still wearing out the Oval Office carpet with his hobnail boots.

Bolton was tweet-fired on a September Tuesday. The Saudis’ big oil field blew up on the following Saturday. The Houthis said they were responsible, and indicated that they thought it was pretty cool.

But the remaining Trump administration foreign policy stalwarts had this handled. They did what they had to do. They announced that they didn’t know who did it.

As days passed, still maintaining that claim, off and on, they announced more sanctions against Iran. Trump said something to the effect that he thought Iran was responsible, but he still wasn’t sure.

He was going to punish them anyway.

He reminded me of my grandfather, who would occasionally cuff me on the head when I was a child. “What was that for?” I’d whine. “That was for what I didn’t catch you at.”

Before long, the Saudis may, in revenge, try to bomb the living daylights out of Yemen. Few would be surprised by that eventuality, because it is behavior like that which has focused the enmity of the Houthis on the kingdom in the first place.

The new problems with Iran started because Trump thought he could get a better treaty through threats. But Iran has a bigger standing army than France and Japan put together, so not so much. And Trump, to this day, doesn’t seem to understand that threats don’t work if you make it clear you’re never going to back them up.

Everybody on Wilson Avenue knew that if you started a fight, but didn’t finish it, the fight would come to you. So you had better be armed and ready.

That’s where Trump is now with the Iranians, especially now that there are more sanctions. So it would not be entirely surprising if he eventually feels himself in the position of having to do something violent with our Navy or Air Force.

When and if it happens, however much damage comes to life and property might have been avoided if we had leaders who understood Uptown as well as Georgetown.