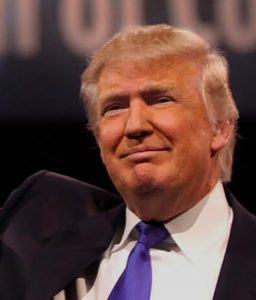 Donald Trump is so accustomed to threatening people with lawyers that he thought one could induce the Supreme Court to stop him from getting impeached.

Somebody who knew how to read had to tell him that Article 1 of the Constitution gives the House the sole power of impeachment, and the Supreme Court, even one refashioned by the Republican Party in its own image, can’t do much about that.

But I don’t see why he’s worried about it anyway.

Trump is obviously susceptible to impeachment. From the start, he’s averaged more than one outlandish thing per day that qualifies him, and he continues unremittingly this year, despite knowing that the Democrats have the votes.

I had earlier assumed that he keeps behaving badly because he doesn’t care much if he’s impeached. That’s partly because I also assumed he knew that the Senate, after a House impeachment, is the body that would vote whether to remove him, and he should have no worries there.

I may have assumed incorrectly.

He doesn’t seem to have a sense of shame, either, so impeachment shouldn’t bother him much.

He’s not like Bill Clinton, who grew up dirt poor, and had at least some sense he was embarrassing those who had helped him climb the ladder, including Democrats on the Hill.

But nothing much seems to embarrass Congressional Republicans lately, and you certainly can’t embarrass President Trump. He grew up with the sincere belief that he is better than other people, and thinks that status continues no matter what.

When he gets to the point where he has to publicly answer for a blatant breach of trust, he just says it never happened. You’re a bad guy for asking the question.

He’s not like Richard Nixon, who was all about shame. And Nixon had more worries in 1974 about impeachment by the House, because unlike in Clinton’s case, the Senate was very likely to remove him.

So he got out of Dodge.

Nixon needed 34 votes in the Senate to survive, according to Article 1. Republican Senators Barry Goldwater and Hugh Scott came by to tell him he would be lucky to muster 15 — about a third of the GOP contingent.

I don’t expect Mitch McConnell and Lindsey Graham would have to tell Trump that he did not have the nearly full support of the Republican Senate majority. Few if any Republicans would vote to remove the President if he had ordered the Air Force to bomb Skokie.

If the House starts the impeachment process, they will certainly finish it with a vote to impeach, because Trump’s done so many bad things. Which Democrat is going to vote “No?” Probably none. Republicans voting “Yes?” About the same. So what kind of an impeachment will that be if it’s entirely voted by Democrats?

A political one, that’s what kind. That’s what Trump would likely trumpet from the beginning to the end and beyond. And he would be successful in retaining his base. He might even add to it.

So impeachment might actually be fun for our President.

Remember that instead of just releasing the Mueller Report immediately, William Barr, our latest temp-worker attorney general, told fairy tales about what it contained. Then he waited 24 days before releasing his redacted, but still damning, copy. So his boss and his boss’ minions had more than three weeks to bray “no collusion” and “no obstruction,” hardening the Barr version of the report’s contents in the marketplace.

Since the Mueller Report did not come in the form of a blanket condemnation, it looked like Trump was right when the thing finally hit the street. He did nothing wrong. So the Mueller Report started out actually helping Trump, despite it reading like the annals of the Gambino family.

What’s going on now is also reminiscent of the Brett Kavanaugh fiasco. As his confirmation hearings wound down, it became apparent that several Republican senators would risk losing female support in their next election if they were to vote him to the Supreme Court.

But Democrats insisted on an FBI investigation they somehow expected would reveal the whole truth. So Republican Sen. Jeff Flake arranged for them to get it: a very short investigation that had no hope of proving anything, and actually gave Flake and his friends cover to vote for Kavanaugh.

I don’t think impeachment would even induce Trump to act a little more like someone who cared. For instance, if one of the Articles of Impeachment condemned him for opening up more national park property to oil drilling and groundwater capture, that wouldn’t necessarily lead him to rescind those executive orders.

If he maintains the impeachment is totally political, he’s not going to change his behavior because of what it reveals.

Impeachment probably wouldn’t prove much to most people who presently think Trump is fit for duty. Nothing else has.

Trump is, nevertheless, showing signs of cracking under pressure. Why else was he unable, after trying three times, to pronounce “origin” any way other than “orange?” Why has he suddenly decided that his father, a New Yorker like himself, was born in Germany?

But even if the pressure gets so bad that he has to hide from the media, like Nixon did, he can still get his points across on Twitter whenever he wants to.

Pressure on the President is a problem, of course, because he might do something worse than all the bad things he’s already done.

And there is something much more dangerous to Trump’s peace of mind than the Mueller Report or impeachment. There is the Southern District of New York, where prosecutors are working on, we’re told, 14 Trump-related cases.

It is reasonable to expect that one of them might involve the reported 86 cash sales of Trump apartments to Russians, for a total of $109 million.

Then there’s the Trump Foundation charity funds which seem to have been used to pay his legal bills.

We’ve all heard about the questionable security clearances granted to Trump’s daughter Ivanka and her husband, Jared Kushner.

Like on “Let’s Make a Deal,” there might be goats and dogs behind some of the prosecutors’ curtains. But there are 14 curtains here.

Behind some of them are ongoing investigations of the Kushners, Donald Trump, Jr., and several associates of Trump, including dirty tricker Roger Stone.

If any of them go to trial, lots of stuff that might be used against the President could be revealed in pre-trial documents.

Trump himself, everybody seems agreed, can’t be indicted while in office. That would mean, however, that he is likely to be indicted immediately after leaving it.

And Gerald Ford is not around to grant him a pardon.

One would expect that before long, the Manhattan prosecutors will start getting ready with cases against the President, and he will very likely know about that.

So if he is smart, or at least has one smart lawyer, he will be looking to trade what’s behind the curtains for what the prosecutors have in their file boxes.

The best deal for him might be to resign in exchange for a get-out-of-jail-free card. Because orange is not really the new black.

And then, we’d have a President who thinks being gay should be illegal.

In the meantime, maybe Democrats can hold off on a counter-productive impeachment circus and apply their shaming tactics to Congress as a whole, and try to do something about immigration, infrastructure replacement and global warming.