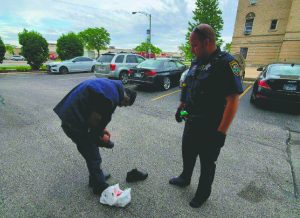 The inspiring tale of the Napa, California boy of 9 who used his accumulated $75 allowance to bail out the lunch debt of his less-fortunate schoolmates burned up the interwebs recently.

The same theme was repeated last week, when a Niles, police officer was photographed by a fellow cop taking off his shoes and giving them to a sore-footed homeless man he encountered on the job.

The theme, for thinking people, goes beyond how generous fellow humans occasionally rescue downtrodden friends and strangers, with money or goods they can easily part with.

The real theme: Why do we elect politicians who insist that we’ve sent them on a mission to ensure people live in circumstances so dire that they need help, not occasionally, but every day? And then wait for Samaritans to give it to them?

Nationwide, the lack of school resources goes far beyond those parents unable to afford supplies at the start of each new school year.

Actually, parents more typically buy supplies the schools are supposed to be buying. Many of those reading this have been required to send sacks of paper towels, Kleenex and toilet paper along with their children in the first week of school. And most teachers have regularly purchased classroom supplies unfunded by school system budgets passed, usually, by elected school boards.

My late wife was a school speech pathologist who worked in a tiny room carved out of the staff washroom next door. She had a lot of teaching aids crammed into cabinets along the claustrophobia-inducing walls lining the space where she taught deaf children to speak. I can’t recall a single item that she or one of her predecessors hadn’t paid for.

The Illinois state budget passed this month uncharacteristically contains 6.3 percent more for schools. The state, by its constitution, is supposed to pay half the bills of all public schools, but doesn’t. Public schools should be financed adequately, statewide and locally. Education is what makes modern life livable.

Too much? The cop who gave his shoes to the homeless man makes $100,000 a year, before overtime.

How about we pay at least a third as much to teachers who can foster skills so people can afford their own shoes and shelter?

Or maybe we should just require that all police officers give up their clothes to homeless people, and put them up in their spare bedrooms.

We have to face the fact that we and our governments and our businesses have created a world generally unfit to live in. Millions of Illinoisans can’t afford the shelter they’re sleeping in, or don’t have a shelter at all. People with mental illnesses roam the streets, untreated and uncared for. Thousands go to work daily despite sicknesses, having no alternative.

Illinois will be collecting and spending more money for schools and other public responsibilities this year than it has in the past. There are some people who will say they have had enough, and move out of state, because they would rather keep as much of their money as possible, rather than wasting it on children and other lazy people.

They may wish to get out before too much money is spent on keeping the bridges from falling down, too.

One of the most popular destinations for such people is Florida.

Once there, they will meet the famous Florida Man. He is the gent who does all those dumb things that make him adorably notorious on the Internet.

But Florida Man has been around since long before the ’net existed. He is a creature of a state that refuses to adequately tax itself for education.

Florida has long been a destination for retirees. A new study indicated recently that Florida, in 2015-16, was one of the fifth most popular states to move to for rich millennials — those under 35 earning $100,000 per year.

The new Florida residents who live long enough can all be assured that as the Atlantic Ocean rises, there will have been inadequate preparation to forestall its advance. Floridians are not taxing themselves for that, either.

But Florida continues to grow. Many of its new residents come from urban areas like Chicago and New York City.

More wealthy millennials reportedly left New York State than anywhere else. Those who stayed are now discussing spending up to $10 billion to mitigate global warming’s effects on the nation’s biggest city.

New York has seen a foot of ocean-level rise in the last 100 years, and folks there are expecting up to six feet more by 2100. They want to be ready in advance.

Those New Yorkers who move to Florida will find their new state has a plan, too.