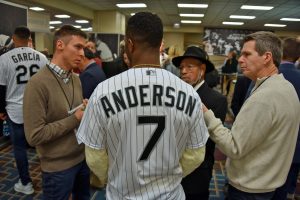 Behind his back, some fans call Tim Anderson, April’s American League Player of the Month, a “bush leaguer.” (Photo by Karie Angell Luc/for Chronicle Media)

I look up from my cell phone, and I see, walking slowly into the tavern, my cousin Yonkel Yossel, the oldest member of my extended family. He is a rare visitor to this area.

“Sholem Aleichem,” says Yonkel, using a traditional greeting I haven’t heard since the last time he was in town. “Aleichem Sholem, Reb Yonkel,” I says back.

Everybody has to get introduced to Yonkel, because he looks like somebody from an unusually accurate casting of “Fiddler on the Roof,” only shorter and older.

They think they’ve seen people who look like Yonkel, but they’re not sure where. “Amazing,” says Tony, who is from Puerto Rico. “You are related to a leprechaun.”

Tony, twice the size of Yonkel, picks him up and deposits him on a stool.

He looks up to see Cubs highlights on the TV sets in the tavern, which is on Chicago’s North Side.

Now he has everybody’s attention. A gent like Yonkel talking about baseball must seem like a golden retriever starting a convo about which is better, Uber or Lyft. Everybody wants to hear this.

He had, apparently, come to town for a charity function in Bridgeport. It broke up about 8:30, and he considered heading down the street to catch the end of the White Sox game, which was about half over, and tied. Yonkel likes a close game, he says.

But it was cold and drizzly, so he went to a nearby tavern, Mitchell’s Tap, where he was sure people would be enthusiastic about their neighborhood team.

“I tell you what happens in the Mitchell’s,” Yonkel says, raising his hand as if testifying. “Honest for true.”

He says he sat to the left of a knot of seven men involved in energetic discussion. He couldn’t quite make out what they were saying, though they were speaking English.

Soon, he clearly heard the name “Sanchez,” he says.

“I thought they were talking about Yolmer Sanchez, of the White Sox, an unusual person,” Yonkel says. He raises his bushy eyebrows as his audience expresses surprise at the depth of his knowledge

Yolmer Sanchez is mostly known for celebrating victories by dumping big Gatorade buckets on players’ heads, including his own. He has critics on both sides of town, and that’s what Yonkel thought the Mitchell’s patrons might be discussing.

“But the Sanchez they were talking about is a soccer player from Columbia who plays in England,” Yonkel says.

“On my left, I see a fellow who was just looking at his telephone. I asks him if he had been watching the game. ‘Yeah,’ he says, ‘but I don’t know anything about it.’

“On his left are two other gentlemen, who both have Cubs hats and shirts on.”

As he gets to this part of the story, Danny the IT Guy interrupts. “Even in Bridgeport, they know the Cubs are better.”

We call Danny by that long name to differentiate him from Danny the Plumber.

Yonkel went on. “The lead keeps changing hands, but some people don’t notice. They’re busy arguing about whether they like Tim Anderson.”

Anderson, the White Sox shortstop, leads both leagues in hitting and stolen bases.

“Some of them were bothered that he had made some fielding errors, but mostly they were annoyed that after he had hit a couple of important home runs, he had flipped his bat.

“Apparently, after one of these flips, a Kansas City pitcher had hit him the next time he came up,” Yonkel says, and looks around a little sadly, because there was no full glass in his vicinity.

Danny the IT Guy rectifies that, and expresses his opinion on the Anderson matter.

“Of course he hits him,” Danny the IT Guy says. “He showed up the pitcher. That’s bush. What Yolmer does, that’s bush, too.”

Yonkel nodded and turned to look at him. “Thank you for the drink. What is ‘bush?’” he asks.

“It’s something that you learn not to do by the end of your time in the minor leagues, which they call the ‘bush leagues,’” Danny the IT Guy says.

“No,” interjected Danny the Plumber. “It is an unwritten rule.”

Yonkel thought about that a moment. “Unwritten rule. The Baseball Rule Book has nine sections, and those are divided into subsections and clauses.

“Altogether, there are 71 rules. Isn’t that enough written rules, without adding any other kind?”

Tony was impressed. “The leprechaun knows more about baseball than you do, Danny,” he says.

“Which Danny are you talking to?” Danny the IT guy asks, a little miffed.

“Where I come from, you don’t name somebody after somebody else until they die. It cuts down on the number of people in one room answering the same question.”

Sherrie, the bartender, interjected. “I think maybe this bat-flippy thing is that kind of a rule. It cuts down on people acting with no class.”

Yonkel turns her way and smiles. “Have you heard of the player named Addison Russell? The one who beat his wife?” he asks.

“How many baseballs has he got hit with?”

“So let me ask you — I go to a White Sox bar where half the people are playing video games or talking about English soccer or doing anything else except watching the game, until the ninth, when Nicky Delmonico wins it with a homer,” Yonkel says.

“In that same bar, Sox fans go around saying their two most interesting players are bush. And you Cubs fans agree,” Yonkel says.

“So whose fault is it that millions of people think baseball is boring?”