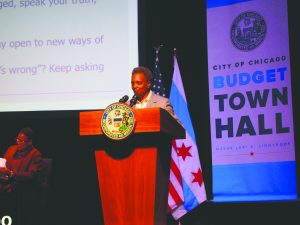 Chicago residents are pitching everything from requiring police malpractice insurance to tossing in their leftover pennies as ways to help close the city’s budget gap.

Mayor Lori Lightfoot jotted things down in a notebook throughout two hours of resident input Sept. 4 at the Copernicus Center on the city’s Northwest Side in the first of four town hall meetings about the budget deficit.

Facing a $838 million budget gap, Lightfoot has said all options are on the table in finding revenue and cutting expenses in the city. She and city officials are going around Chicago to explain how the city got in its current fiscal peril, but more importantly, to hear residents’ thoughts on how to get out of it.

The budget deficit has been created by the city being required to ramp up its funding to cover city employees’ pensions. Chicago’s annual pension funding was at $382 million in 2004 and is projected to be at $2.3 billion by 2025.

The ramping up of funding is because of all municipalities in the state being required to get to 90 percent of full funding by 2055.

Park said that 54 percent of residents’ tax bills go to fund Chicago public schools while city services get 25 percent of that tax bill. She noted that 38 percent of the tax dollars paid to the city go directly into the city’s police pension fund.

She said that a survey being conducted to gauge residents’ input on the budget show that residents feel that about 50 percent of the money the city expends should go toward public safety measures, with one-third of that going toward police.

“It is about where things are in the city budget,” Park said. 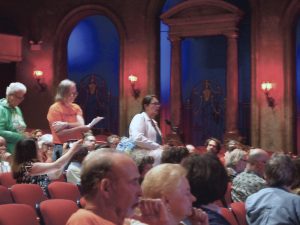 Chicago residents line up to give their suggestion on how to close the city’s budget gap. (Photo by Kevin Beese/Chronicle Media)

Individuals interested in taking the budget survey can go to www.chicago.gov/2020budget.

Lightfoot said this is important time in city residents’ lives.

“While we face significant challenges as a city, we are also standing at the forefront of tremendous opportunity, and I know many of you believe that as well,” the mayor said.

She said the city needs to embark on a new, respectful partnership with its residents to develop “real, sustainable solutions to our challenges.”

Lightfoot said by including the people most affected by changes the city will create inclusive growth and opportunities that are accessible to all.

“We have to face our challenges together, growing together and fulfilling our promise as a city that it’s a beacon of hope to every resident,” the mayor said.

City resident Bill Anderson said the city could save money by having a hotline where employees could report waste, fraud and abuse.

Rick Heidner said that video gaming could bring in $50 million to $70 million annually for the city. An industry proponent as the owner of Gold Rush Gaming, Heidner said Chicago is one of only 100 municipalities in the state that does still not allow video gaming and that the gambling tool would allow the city to fill multiple vacant storefronts.

“I’ve definitely heard a lot about that idea,” Lightfoot said.

Therese Stasik, a resident of the city’s 38th Ward, said that she sees a lot of street lights on during daylight hours.

“Why not turn the lights off?” Stasik asked.

She also suggested that canisters be set up in city locations and businesses in the city where patrons could drop their spare change.

“People could drop off their extra pennies. It could be a campaign, ‘Chicago is worth every penny,’” she said. 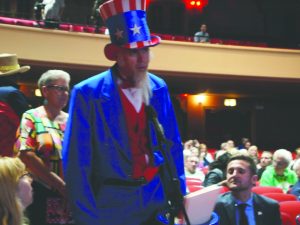 Tom Tresser with the TIF Illumination Project said the city could save $1.5 billion by rescinding the tax-increment financing district created for the Lincoln Yards project.

Charles Austin said like doctors, Realtors and other professionals, Chicago police should be required to carry malpractice insurance so that they as individuals, not the city, are liable for any wrongdoing.

“I think police would be more accountable for their actions,” Austin said.

Other budget town halls will be: