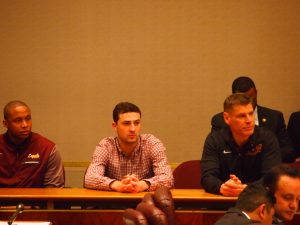 It wasn’t any political statement when just a few members of the Loyola University men’s basketball team showed up for recognition before the Chicago City Council.

“Loyola University has a very strict rule: You have class, you gotta go to class,” Ald. Joe Moore, whose 49th Ward includes Loyola, said at the council’s April 19 meeting. “It doesn’t mean if you’re a star it doesn’t matter. You go to class; and today most of the team members are in class. It probably explains why among Loyola athletes there is a 99 percent graduation rate.

“Far too many schools are treated as mills in which athletes just travel through and a lucky few make it to the NBA, but most of them fail to graduate and fail to succeed in life.”

Loyola’s men’s basketball team gave the city and the country a March to remember, toppling higher seeds all along the way to the Final Four in the NCAA basketball tournament.

Moore noted that Loyola’s stellar graduation rate for student-athletes ties the university with Columbia, Dartmouth, Gonzaga, Yale and Harvard. He touted Loyola student-athletes’ cumulative grade point average of 3.36 as the bar for other colleges and universities to shoot for among their athletes.

Due to the rest of the players being in class, just three members of basketball team joined coach Porter Moser and Sister Jean Schmidt to accept the city’s honors.

Moore noted that at 98 years old, Sister Jean, who has the most successful bobble head in bobble head history, lives in campus housing to be with the students. 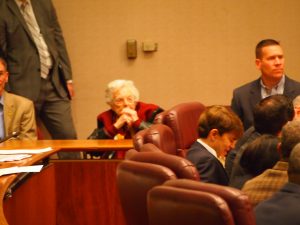 “It is a complete and total example of the humble nature of America’s most famous nun,” Moore said.

The alderman said the Loyola team stands as an example of men of character when youths need role models.

Ald. David Moore (17th Ward) said he hoped the Ramblers’ success would lead to more local high school players staying at home to play their college basketball “so this city can continue to shine as a star city.”

Ald. Harry Osterman (48th) said that a lot of the good work that Loyola athletes and other students do is under the radar.

“Loyola University does so much for our city, so much for our community and a lot of that goes unseen,” the alderman said. “The students that go there are involved as student-teachers and volunteers. Student-athletes on the basketball team exemplify that, participating in after-school programs.

“They go there basically to hang out, have pizza, play basketball with these young kids from our community,” Osterman said. “That’s a real thing that matters to these kids’ lives.” 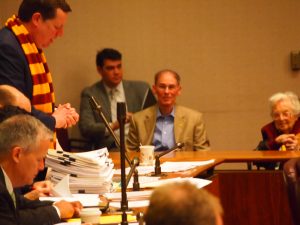 The alderman said he watched Moser coach the team against Northern Iowa in December in Loyola’s Gentile Center when the crowd might have been less than the gallery at the April 18 City Council meeting.

“You were the same coach or appeared to be the same coach then that you were in the Final Four,” Osterman said. “The consistency, the leadership that you show your young student-athletes is a lifelong lesson for them.”

Mayor Rahm Emanuel said the team’s improbable run will be played over in people’s minds time and time again.

“It was not just another season,” Emanuel said. “… It was a Cinderella story. You obviously beat brackets and you beat buzzers as well.”

The mayor said he was struck by something he heard Moser say about his recruiting efforts.

“You tell the young men and their families that you’re not a coach for a season, but a coach for life,” Emmanuel said. “… There’s a genuineness and an authenticity to your Cinderella story.”