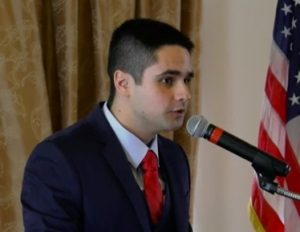 Madigan announced Wednesday he would back Angelica Guerrero Cuellar, the candidate who received the second-highest number of votes on Sunday.

Kodatt, 26, is listed as a former member of the House of Representatives on the Illinois General Assembly’s website.

The Tuesday statement from Quinn, who represents Chicago’s 13th Ward, and Madigan does not elaborate on the details of the “questionable conduct.”

“After learning of alleged questionable conduct by Mr. Kodatt, it was suggested that he resign as state representative for the 22nd District. We are committed to a zero-tolerance policy in the workplace,” they said in the statement.

Kodatt, who is bilingual and of Ecuadorian decent, spent only three days serving as representative for the 22nd House District.

After Madigan resigned from his seat last week, Kodatt was handpicked by Madigan during a committee meeting on Sunday of the five Democratic committeepersons who represent the wards within the 22nd District.

In a statement issued Wednesday through his spokesperson, Madigan said the committee will meet again on Thursday to select “a replacement for the 22nd District Illinois House seat from the pool of candidates who already presented to the selection committee.”

“I believe the most equitable way to proceed is to nominate the candidate who received the second-highest vote count. It is my intention to nominate Angelica Guerrero Cuellar,” he said in the statement.

Vacancies in the 22nd House District are filled by vote of the committeepersons who represent the 13th, 14th, 18th, and 23rd wards and Stickney Township.

Each committeeperson’s vote is weighted by population, and Madigan’s vote guaranteed Kodatt’s appointment, as his ward includes more than half of the district’s population. Kodatt was one of 10 candidates who made presentations to the committee.

Ald. Silvana Tabares, of the 23rd Ward, has the second highest weighted vote.

Tabares voted for Guerrero Cuellar, who works with a nonprofit community service organization in Chicago.

The committee will meet Thursday at 10 a.m., at the Balzekas Museum of Lithuanian Culture, which also houses the 13th Ward Democratic Organization’s offices. The meeting will be open to the public.