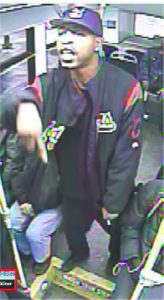 Police are looking for the offender who cut a man’s face with a knife on a CTA bus in Chicago’s Austin neighborhood.

The man pushed the offender off of him and the offender then brandished a knife and cut the victim’s face. The victim, while attempting to defend himself, grabbed the knife and was also cut on the hand.

The offender then fled the bus and boarded a following bus that was also heading southbound on Cicero.

The offender was described as a black man, 20-30 years old, 6 feet, 160 pounds, and wearing a blue and red hat and jacket, and black pants.

Police offered the following tips to avoid being the victim of an aggravated battery and how to react, if confronted by an offender:

Anyone with information about the CTA attack or the offender should contact the Chicago Police Department’s Bureau of Detectives for Area North at 312-744-8261.